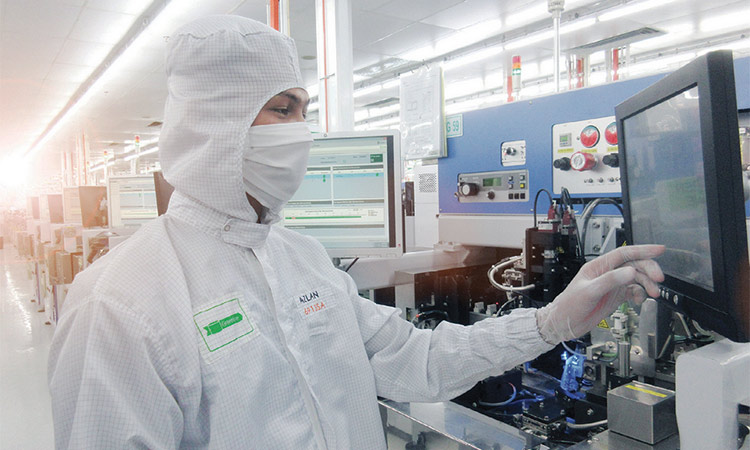 Infineon shares traded at 14.82 euros in Frankfurt, representing a fall of nearly 30% since they peaked in April/

Infineon has agreed to buy Cypress Semiconductors in a deal that values the US maker of microchips used in cars and electronic devices at 9 billion euros ($10.1 billion) including debt, sending shares in the German company sharply lower on concerns over the cost.

The cash offer of $23.85 per share represents a 46% premium to Cypress’ share price over the last month, the Munich-based maker of power-management chips said on Monday.

“From our point of view it was an acceptable price, and if you look at the synergies, it represents an additional gain in value,” Ploss told reporters on a conference call.

Chief Marketing Officer Helmut Gassel said discussions had been triggered by interest expressed in Cypress by another unidentified party. Infineon was invited to take part in the process around five weeks ago.

Infineon was among the few companies in a sector facing headwinds that could finance a deal that in more prosperous times might have been out of its reach, veteran CEO Ploss said.

Investors took a dimmer view, however, sending shares in Infineon almost 8% lower on fears that it was overpaying in a transaction that will be 30% financed through equity, with the rest paid for in debt and cash. Cypress shares jumped 27% to $22.74 in US pre-market trading, below Infineon’s offer.

“Our initial view is that the overall risk-reward profile of the deal is unfavourable,” Citi analysts said in a note, highlighting execution and regulatory risks, and promised long-term synergies that were hard to substantiate.

One trader speculated that Infineon could itself become a takeover target after the company twice lowered its revenue guidance this year as demand in China slowed and trade frictions escalated between Washington and Beijing.

Infineon shares traded at 14.82 euros in Frankfurt, representing a fall of nearly 30% since they peaked in April, to value the business at 17 billion euros.

The deal made sense on a technology basis, but represented “a cycle peak price” at a time when the industry is at a cyclical trough and visibility is low, said Mirabaud Securities analyst Neil Campling.

The deal to create the world’s No.8 chipmaker ranks as one of the biggest takeovers led by a European company this year and follows a slowdown in activity in the first quarter.

A recent surge in major deals − which includes the proposed merger of Fiat Chrysler and Renault as well as EQT’s acquisition of Nestle’s skin health business - will boost investment banking fees which suffered from companies’ recent caution.

In semiconductors, global deals activity slowed to $23 billion last year from a peak of $107 billion in 2015, according to IC Insights, as the Trump administration stepped up scrutiny of tech mergers relevant to US national security.

Infineon said it expected the deal, subject to regulatory approval, to close by the end of this or in early 2020, creating a leader in the automotive sector with a global market share of more than 13%.

Cypress said, for its part, that it would have to pay a $330 million break fee if Infineon is outbid. Infineon should pay $425 million, in other situations, if the deal falls apart.

Infineon played down concerns that the takeover might be blocked by CFIUS, the US panel that reviews whether deals might compromise national security, saying that Cypress’s focus on automotive products meant its products were not sensitive.

Infineon has curbed deliveries of US-sourced products to Huawei in response to Washington’s imposition of export controls on the Chinese telecoms giant. It says that most of its business with Huawei remains unaffected.

The deal represents a bet on the growth of the so-called Internet of Things (IoT), the universe of connected devices ranging from robots to refrigerators that is expected to expand rapidly in the years ahead.

Infineon expects the deal to add to earnings in the first full year after closing.

It nudged up its long-term revenue forecast to 9% or more, lifted its main margin target by 2 percentage points to 19% and said its investment-to-sales ratio would decrease to 13 per cent.

Expected economies of scale would deliver 180 million euros in annual cost savings by 2022, while long-term revenue synergies would reach 1 billion euros by 2025 and 1.5 billion towards the end of next decade.

Infineon’s leverage ratio, measured as gross debt to earnings before interest, taxation, depreciation and amortisation (EBITDA) will exceed a target of two times before returning to that level in late 2022.

Still, Infineon expects to keep its investment grade credit rating after the deal, which Schneider said had been fully underwritten by banks Credit Suisse, J.P. Morgan and Bank of America Merrill Lynch. Cypress was advised by Morgan Stanley.