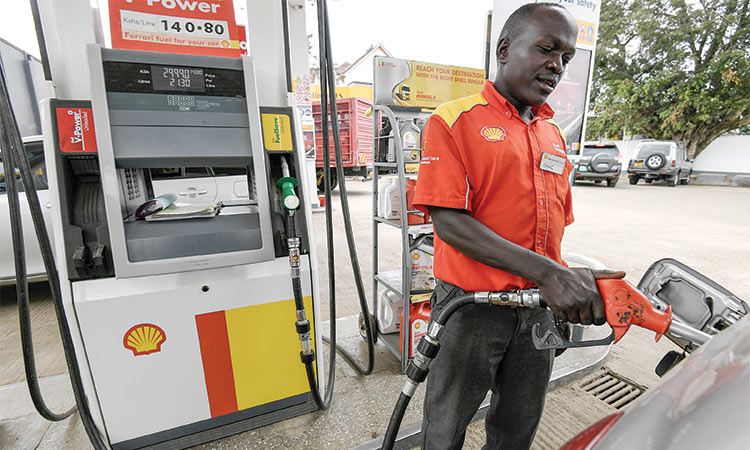 An attendant at a petrol station in Nairobi, Kenya. Agence France-Presse

Kenya’s gross domestic product (GDP) is likely to expand by at least 6 per cent this year, the country’s finance minister said, sticking to rosy government forecasts despite delayed rains that could hit agriculture, a mainstay of the economy.

The Kenyan economy grew 6.3 per cent last year, the statistics office said, helped by adequate rainfall, which spurred farming, which contributes about a third of output. Growth had slumped to 4.9 per cent in 2017.

“The Kenyan economy remains resilient. It is expected to perform better in 2019, growing by at least over 6 per cent,” the minister, Henry Rotich, said at an event to disclose last year’s economic performance.

The World Bank trimmed its forecast for Kenyan growth in 2019 to 5.7 per cent this month from an earlier forecast of 5.8 per cent because the main rainy season was delayed. Food shortages and water scarcity could worsen if the rainy season - from March to May — fails entirely, the country’s meteorological department said just days after the World Bank’s move.

“Uncertain rainfall may act as an inadvertent drag on growth,” said Razia Khan, the head of research for Africa at Standard Chartered in London.

The government, however, which expects the economy to grow by 6.3 per cent in 2019, according to President Uhuru Kenyatta in a speech earlier this month, stuck to its optimism.

“Though the onset of the long rains have delayed, it is still early to predict on its impact on agricultural production,” Rotich said.

Last year’s recovery in growth was driven by agriculture, excluding fisheries and forestry, which expanded by 6.6 per cent, up from 1.8 per cent in 2017, said Zachary Mwangi, director general of the Kenya National Bureau of Statistics.