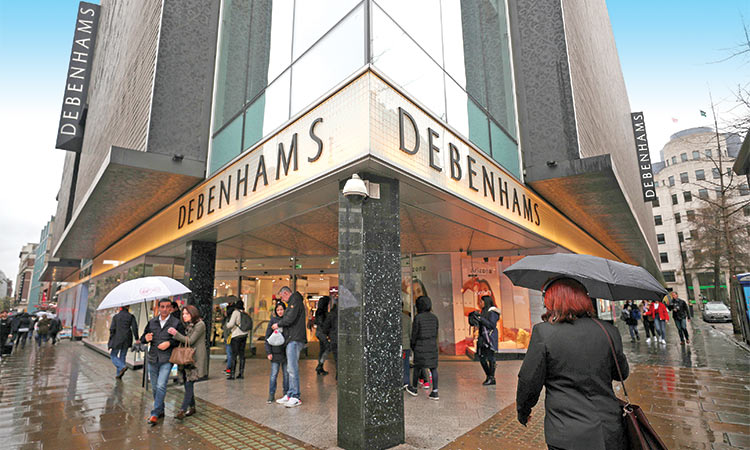 Shoppers walk past an outlet of Debenhams in London. Reuters

Debenhams plans to close 22 stores next year, putting about 1,200 jobs at risk, under a scheme designed to put the ailing British retailer on a stable financial footing.

Debenhams’ lenders took control of the retailer earlier this month in an effort to keep stores open, a deal which wiped out the company’s shareholders, including Sports Direct boss Mike Ashley, who had tried to take control of the business.

The retailer on Friday gave details of two proposed company voluntary arrangements which would keep all stores open during 2019, but with 22 closures planned for next year.

Once the country’s biggest department store chain, Debenhams has been hit by a sharp slowdown in sales, high rents and ballooning debt, plus a power struggle with billionaire shareholder Ashley’s Sports Direct.

Administrators were appointed after Ashley’s last-ditch bid to rescue the company failed. They sold the group to its creditors including British banks and US hedge funds.

CVAs allow retailers to avoid insolvency by offloading unwanted stores and securing lower rents on others and reach a compromise with creditors. They have been adopted by other British retailers including fashion chain New Look.

“In order for the business to prosper, we need to restructure the group’s store portfolio and its balance sheet, which are not appropriate for today’s much changed retail environment,” Debenhams Executive Chairman Terry Duddy said.

“Our priority is to save as many stores and as many jobs as we can, while making the business fit for the future.”

Debenhams said some of its financial creditors recently provided 200 million pounds ($258.06 million) of fresh liquidity and have committed to converting 100 million pounds of debt to equity.