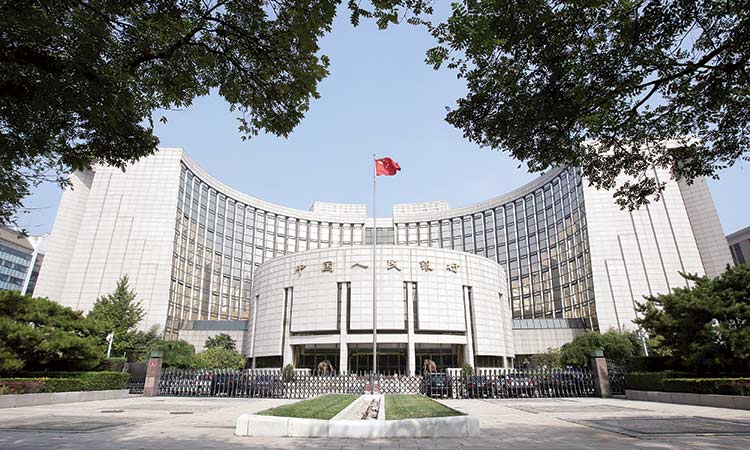 The headquarters of the People’s Bank of China in Beijing. Reuters

China’s central bank extended 267.4 billion yuan ($39.8 billion) to some commercial banks on Wednesday via its targeted medium-term lending facility (TMLF) as it looks to provide struggling smaller business with a steady stream of affordable financing.

The major move suggests the People’s Bank of China (PBOC) is now leaning more on targeted tools to direct funding to parts of the economy that are still struggling, rather than more sweeping system-wide cash infusions used over the past year when there were worries of a sharper slowdown.

Expectations of further stimulus in China have shifted markedly since the release of better-than-expected first-quarter GDP and March economic data last week, which suggested the economy may be starting to steady after a flurry of earlier growth-boosting measures.

Traders had speculated last week that the central bank was preparing to use the new medium-term loan programme for a second time, after debuting it in December. The scheme was tailored to get more funding to cash-strapped smaller companies, as Chinese banks tend to prefer lending to state-backed firms.

The PBOC said the one-year interest rate on the TMLF was 3.15 per cent, the same as the previous operation, and 15 basis points lower than medium-term lending facility (MLF) loans.

With economic data showing signs of improvement, policy insiders told Reuters that the PBOC is likely to pause to assess conditions before making any more bolder policy moves. It had cut banks’ reserve requirement ratios (RRR) five times over the past year, most recently in January, while guiding short-term interest rates lower.

The central bank is also worried that pumping too much cash into the economy could reignite speculative bubbles, the policy insiders said, and wants to save some of its policy ammunition in case activity deteriorates again.

But they stressed the PBOC’s easing bias remains unchanged, and noted that fiscal stimulus such as tax cuts are only beginning to work their way through the economy, providing continued policy support in various forms. Analysts at Nomura believe Wednesday’s liquidity injection reduces the need for an RRR cut in the near term. Many market watchers had initially expected another move this month, though some pushed those forecasts back to June following the upbeat data.

On Wednesday, a report on the website of the Finance News, a paper run by the central bank, denied market talk that the bank had cut RRR for some rural banks.

“The news is untrue and the central bank has no new targeted RRR cut policy at present,” the paper said.

The latest TMLF “matches the central bank’s recent attitude that it does not want the market to speculate on further monetary policy easing,” Stephen Chiu, FX and rates strategist at China Construction Bank (Asia) in Hong Kong, said in a note.

While March data fueled optimism that the economy may be starting to stabilise after growth slowed to a near 30-year low in 2018, analysts have cautioned it is too early to tell if it is back on sustainable, solid footing.

Recent comments from top policymaking bodies that China should fine-tune monetary policy have reinforced views that authorities may be switching to a more measured wait-and-see stand.

Fears of less stimulus have triggered a sharp reversal in the country’s rallying stock markets, which are highly sensitive to liquidity changes. Property stocks have taken a particularly heavy beating as past credit sprees in China have often led to sharp rises in home prices.

“As today’s TMLF already represents the TMLF for the whole of Q2, the market remains worried about reduced easing or even tightening,” Frances Cheung, head of macro strategy for Asia at Westpac in Singapore said.