CEO Conference focuses on Growth in a Volatile Future - GulfToday

CEO Conference focuses on ‘Growth in a Volatile Future’ 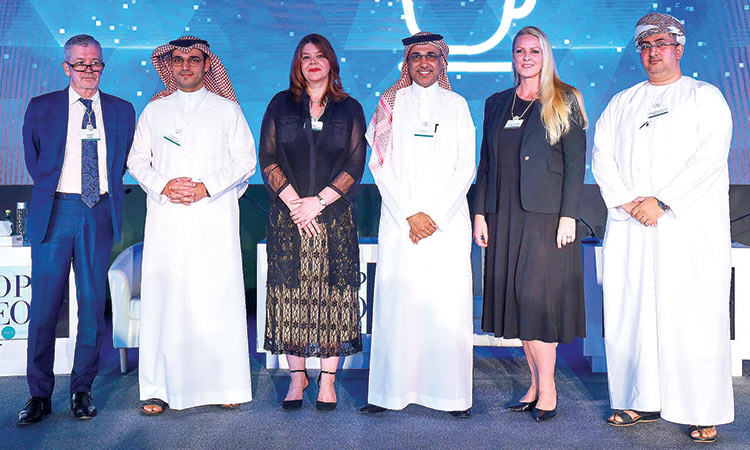 The “Top CEO Conference & Awards 2019”, organised by TRENDS and leading international business school INSEAD, has drawn to a successful close at the Al Areen Palace and Spa in the Kingdom of Bahrain. The event, held on Thursday, April 11, included seven key panel discussions under the theme of “Growth in a Volatile Future” as well as a Top CEO Awards 2019 ceremony, which recognized the region’s most successful and trendsetting CEOs from a list of more than 700 companies listed on GCC stock exchanges.

Top business leaders and more than 30 speakers from across the GCC and Middle East regions shed light on the Middle East’s dynamic but volatile region and the burning issues facing the corporate world today. This year’s theme, “Growth in a Volatile Future,” focused on a score of relevant issues from oil price fluctuations, tech disruptions, as well as armed and political schisms that pose new risks, and opportunities. Amid such challenges and new global economic realities, leading speakers such as renowned economist Prof. Nouriel Roubini provided growth solutions and road maps for businesses in the GCC region.

Alexandre Hawari, CEO of Mediaquest, the company behind the “Top CEO Conference & Awards 2019” said: “In its fifth edition, the Top CEO Conference & Awards fully encapsulated the theme of ‘Growth in a Volatile Future’ by acknowledging and exploring the growth transformation that the region is undergoing through digitalization and the fourth industrial revolution amid geopolitical tensions, looming trade wars and a rapidly evolving business environment. Building on the huge success of the previous years, the Top CEO Awards 2019 recognized CEOs and companies who have raised the bar by navigating challenges, implementing new strategies, and have demonstrated unquestionable growth, profitability and excellence in corporate governance.”

The Conference kicked off with a powerful opening keynote from Jassim AlSeddiqi, CEO of the Abu Dhabi Financial Group and Chairman of GFH Financial Group, who delved into the potential of transforming the region into a fintech hub and the importance of jumping on the digital bandwagon.

The prime panel discussion on the “Future of Growth Amid Volatility” brought together five notable CEOs who explored methods to create future-proof strategies that can not only tackle challenges but also boost growth in a tough geopolitical and economic climate. They spoke extensively on methods to mitigate risks and enhance business interactions in a formidable economic environment.

Hisham AlRayes, CEO and Board Member of the GFH Financial Group, said: “GFH Group with its commitment to being at the forefront on innovation in finance and investing in the GCC was delighted to host a world-class group of visionary business leaders in the Kingdom of Bahrain to discuss the pressing topics of the day and those which are transforming the global and regional economies. Investing in the future in areas such as fintech, education and technology, the foundations for strong, enduring knowledge based economies, is a priority for the Group and the governments of the region in which we invest and we were honored to be able to help facilitate a day of thoughtful discussions and the sharing of strategies and paradigms for continued and sustainable growth.”

The Top CEO Conference and Awards also showcased Bahrain as a beacon in economic diversification stressing on its digital drive and the progress the kingdom has made toward its ambitious plans of becoming a fintech hub. With diversification taking centre stage in government drives such as Bahrain 2030, and Saudi Arabia’s Vision 2030, the panel discussions such as “Bahrain’s Growth Dynamics”, “Cost Cutting, Profit Risks and Government Spending”, and “Do Structural Reforms Attract Direct Investments” provided insights into how businesses can grow alongside government initiatives while evaluating the future of regulation in the region.

Technological innovations and the future of business was discussed during “The Blockchain Opportunity” and “The Human Factor and Tech Innovation” panels, which brought together industry experts from Facebook, the Bahrain FinTech Bay, and King Abdulaziz University. The impact of blockchain on revenues was discussed in the context of new digital ledgers, enhanced payment systems, interbank dealings and corporate interoperability. The panels also brought to the forefront the importance of finding the balance between human touchpoints and the complex web of technology that drives customization and personalization in the B2C space.

The increasing importance of inclusion and diversity in the business world was marked by the launch of The Diversity Council Mena, a diversity & inclusion accelerator, by Nordic consultancy Above & Beyond Group in partnership with Mediaquest. The panel shed light on the relevance of inclusion and diversity in a region that has opened its doors to expat populations from around the world.  “The Future of Women Business Leadership” panel discussed positive strides taken by GCC governments and businesses in leveling the playing field for women professionals. The expert panel of Lamah Al-Khayyal, Head of Saudi Aramco Driving Center; Paolo Gallo Author, International Speaker and Executive Coach; Dr. Maliha Hashmi, Executive Director, NEOM; and Elham Yousry Mahfouz, CEO, Commercial Bank of Kuwait spoke at length about providing effective platforms and sustaining business ecosystems that include women leaders.