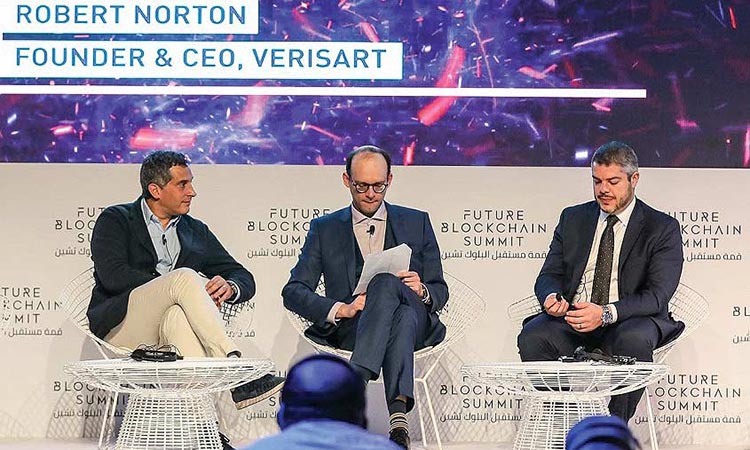 Panellists during the annual Future Blockchain Summit in Dubai on Tuesday.

Her Excellency inaugurated the agenda-setting and globally empowering blockchain meet on Tuesday with an address welcoming a projected 10,000 visitors to the two-day event, hosted by Smart Dubai and Dubai World Trade Centre (DWTC).

She said: “Dubai has always been a trendsetter when it comes to embracing advanced technologies – and blockchain is no exception.

Empowered and inspired by the forward-thinking vision of our leaders, Smart Dubai has been progressing with the implementation of the ambitious Dubai Blockchain Strategy, launched by Sheikh Hamdan Bin Mohammed Bin Rashid Al Maktoum, Crown Prince of Dubai and Chairman of the Dubai Executive Council in 2016.

She added, “Today, we are currently implementing several city-wide government and private sector blockchain use-cases, and later this year will be launching the official policies for blockchain development and implementation in Dubai.”

Keynote-led discussions across Future Blockchain Summit’s Prism Stage also comprised speakers from international entities and industry-leading companies including the US Department of State, the United Nations, the Dutch Government, du, Coca Cola and SAP. Phil Chen is consumer technology firm HTC’s Decentralised Chief Officer, and spoke about blockchain being “bigger than the smartphone”.

He said: “The internet today is very centralised – it keeps track of everyone, with more predictive power and surveillance capabilities than ever before rested in the hands of handful of companies. What we need today is a ‘decentralised web’ and that is possible through blockchain, which allows people to own their digital identities. In today’s digital-age, anybody can have access to your email and use it to transfer, for instance, money. In order for such things to not happen, you will need to own your own digital identities.”

leading experts from the world of art and memorabilia used Dubai’s Future Blockchain Summit to call-out for the revolutionary technology to be placed at the heart of history and be implemented across authentication.

They argued that blockchain offers a permanent record of a piece’s history, from initial authentication to present ownership.

Norton said: “According to the FBI, around 10% of the $60 billion or so works of art that are traded each year are fraudulent works. Blockchain is a layer of trust that you can wrap around your existing databases. At Verisart, we don’t spend time dealing with what’s been in the market for the last 50 or 100 years, we focus on what’s coming into the market for the first time, putting that stake in the ground. Blockchain is a trusted ledger, it is an incredible and powerful device that we can all agree on.” Nassar continued the point, saying: “About one third of the sports memorabilia market is estimated to be counterfeit. This is everything from autographs, to jerseys, signed footballs, basketballs, etc. In fact, in the US, we have had a number of high-profile lawsuits recently that have challenged the authenticity of some of these products. The market is depressed because a lot of people don’t feel comfortable purchasing these products since they are not what they claim to be.

“We are still in the early stages of this, but one of the things we have been thinking about seriously is how do we leverage blockchain technology for the authentication of memorabilia and other products. What we are really after is enabling a user or customer to have the confidence that what the memorabilia they are paying for is verified and what it claims to be.” How blockchain is changing healthcare: from the open source blood donation platform predicting demand and finding rare donors, to the authentication of medical licenses Future Blockchain Summit’s opening day healthcare track shone the spotlight on just some of the infinite implementations of the technology that are already playing a pivotal role in saving lives around the world.

Pierre-Marie Heller, Board Advisor at the world’s first open social blood bank Bloodchain, took to the Summit’s Function Stage to explain the thinking and operation behind the donation platform that can predict demand and find rare donors for those in need, and is one of the biggest ever innovations in the blood donation industry.

By utilizing blockchain, Bloodchain – which caters to an international blood market that receives 112.5 million donations a year – can correlate and use the vastness of invisible-at-first-sight patterns from Big Data to keep a clear track of donations and be a flexible, intelligent solution that follows the current blood demand.