Eurozone inflation slows to 1.4 per cent in March - GulfToday

Eurozone inflation slows to 1.4 per cent in March 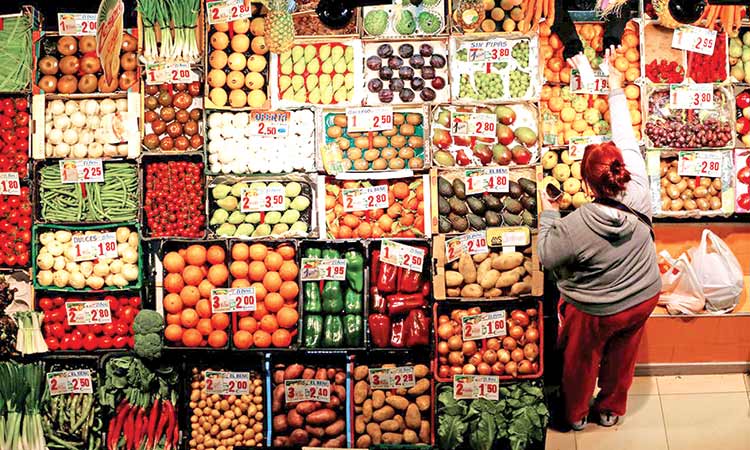 A woman shops at a fruits and vegetables market in Seville, southern Spain. Reuters

BRUSSELS/FRANKFURT: Eurozone inflation unexpectedly slowed in March, adding to the pressure on the European Central Bank (ECB) as it battles an economic slowdown which threatens to undo years of stimulus.

Headline inflation in the 19 countries sharing the euro slowed to 1.4 per cent in March from 1.5 per cent a month earlier, short of market expectations for a steady rate and also well below the ECB’s target of almost 2 per cent.

In a more worrying sign, a closely watched underlying inflation figure that excludes volatile food and energy prices, slowed to 1.0 per cent, its weakest reading since April 2018.

Although wages are rising and employment is at a record high, consumer prices have repeatedly disappointed and underlying inflation remains weak, baffling policymakers and putting in doubt the central bank’s ability to control prices.

ECB President Mario Draghi has long predicted a rise in underlying inflation, only for the data to disappoint and forcing the ECB to ask for even more time to lift prices.

“Today’s price data should further depress inflation expectations in the market, all the more so as the headline inflation rate fell to 1.4 per cent in March,” Commerzbank economist Christoph Weil said on Monday.

“It is likely to remain well below the ECB’s inflation target of close to 2 per cent over the rest of the year.”

Still, some of the core inflation drop may be reversed next month, some economists said, attributing the fall to seasonal factors as Easter is in April this year, suggesting that some price rise around the holiday are likely to come later.

Although the ECB ended its 2.6 trillion euro bond purchase scheme at the end of last year, it has put plans to “normalise” policy on hold, delaying a rate hike into next year.

It is also working on plans to give banks even more cheap loans, hoping to maintain the flow of credit to the economy.

Energy prices were the only major component of the index that accelerated in March, to a rise of 5.3 per cent year-on-year from 3.6 per cent in February.

But an even more narrow core inflation reading, which also excludes alcohol and tobacco and is watched closely by market economists, decelerated to 0.8 per cent from 1.0 per cent in February, against the average expectation of 0.9 per cent.

Eurostat data showed separately that the unemployment rate was unchanged at 7.8 per cent of the workforce in February against January, but the number of people out of a job fell to 12.730 million from 12.807 million in January.

Meanwhile the eurozone government bond yields rose on Monday as an unexpected bounce in Chinese factory activity data and hopes of an easing in world trade tensions took the shine off safe-haven bond markets after last month’s stunning price rally.

Still, given the scale of the shift in how investors view the outlook for growth and inflation, bond yields remained well below levels they traded a month ago, while data from the bloc highlighted that eurozone growth conditions remain weak.

The factory activity remained weak around the world last month, reinforcing worries of a global slowdown as forward-looking indicators pointed to gloomy times ahead, surveys showed on Monday.

Eurozone manufacturers had their weakest month for almost six years in March. While China showed a slight, surprising recovery last month, growth in new domestic and export orders was marginal, in a sign that stimulus already injected into Asia’s growth engine may not be enough.

Britain was an anomaly, with manufacturing growth at an unexpected 13-month high, but that was driven by factories stockpiling for Brexit at an explosive rate, unlike anything seen before in a major rich economy.

“The jump in the UK manufacturing PMI in March largely reflects producers rushing to complete work before the Brexit deadline, rather than a strengthening of underlying demand,” said Samuel Tombs at Pantheon Macroeconomics.

Figures from Germany and France, the Euro zone’s two biggest economies, showed manufacturing activity contracted, as it did in Italy. Growth returned in Spain after a brief dip in February but activity was still stagnating.

So IHS Markit’s March final manufacturing Purchasing Managers’ Index (PMI) for the Euro zone declined for an eighth month, coming in at 47.5 from February’s 49.3, its lowest reading since April 2013.

“The fall in the manufacturing PMI shows that the industrial recession is still deepening,” said Holger Schmieding at Berenberg.