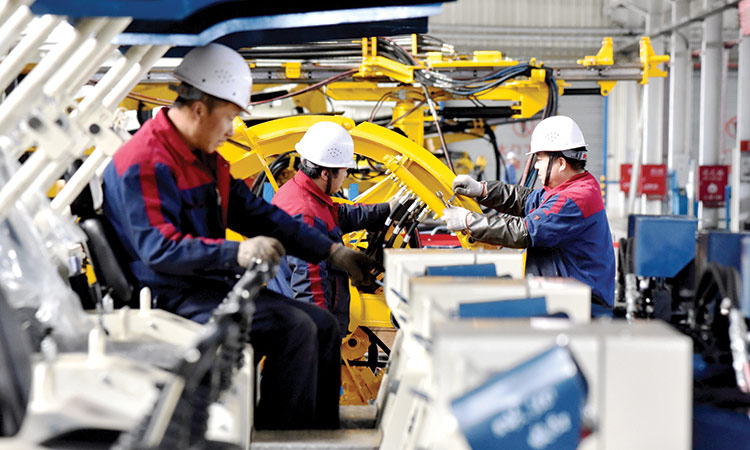 Employees work on a drilling machine production line at a factory in Zhangjiakou, China. Reuters

BEIJING: China’s manufacturing sector unexpectedly returned to growth for the first time in four months in March, in a sign that government stimulus measures may be slowly gaining traction, a private business survey showed on Monday.

But growth in new domestic and exports orders was marginal, suggesting the economy will remain under pressure in coming months and will likely require more policy support before it can convincingly stabilise.

The Caixin/Markit Manufacturing Purchasing Managers’ Index (PMI) expanded at the strongest pace in eight months in March, rising to 50.8 from 49.9 in February, above the neutral 50-mark dividing expansion from contraction on a monthly basis and the highest level seen since July 2018.

Economists polled by Reuters had forecast the reading for March would stay unchanged at 49.9. The surprise expansion seen in the Caixin survey echoed that seen in the official PMI released on Sunday, which also showed factory activity defying expectations for another contraction in March.

“With a more relaxed financing environment, government efforts to bail out the private sector and positive progress in Sino-US trade talks, the situation across the manufacturing sector recovered in March,” Zhengsheng Zhong, director of macroeconomic analysis at CEBM Group, said in a commentary accompanying the data release.

China has made proposals in talks with the United States on a range of issues that go further than it has before, including on forced technology transfer, as the two sides work to overcome obstacles to a deal to end their protracted trade war, US officials told Reuters.

But sources close to the talks have stressed that a deal is by no means certain, and tit-for-tat tariffs on both sides have remained in place.

Zhang noted the employment situation improved significantly in March, a trend that may ease some government and investor concerns after the unemployment rate in urban areas for February rose to the highest since early 2017.

Caixin’s findings showed factories added headcount in March for the first time in 65 months, arresting a relentless spell of job shedding since October 2013. Some firms were hiring to support higher production and new business development, the release said.

New orders − an indicator of future activity − increased for the second month running, though the pace of growth was marginal. Output also grew for the second straight month.

New export orders expanded after contracting in the previous month. Though the rate of increase was fractional, Caixin said the broad trend appeared to have steadied in the first quarter.

“The producer price index might have risen faster year-on-year in March, and increased month-on-month, compared with a monthly decline in February,” Zhong added. Optimism among businesses edged up to a 10-month high partly on expectations that market conditions, both at home and abroad, will improve, the statement said. But purchasing activity declined for the third straight month, suggesting some firms remain cautious.

Economists at Nomura have forecast that China’s industrial production growth will moderate again in April and May after a brief rebound in March mainly due to last year’s low base.

China’s Caixin/Markit Manufacturing PMI expanded at the strongest pace in eight months in March, rising to 50.8 from 49.9, the highest level since July 2018.

An official survey released on Sunday also showed modest expansion. Economists cautioned there were seasonal factors in play, with activity in March traditionally picking up markedly whenever the Chinese Lunar New Year holidays fell in February, as they did this year.

But if the trend is sustained, it could mark the turnaround China’s policymakers had hoped for after some heavy fiscal and monetary stimulus, including five cuts in bank reserve requirements in the past year, although analysts say more measures may be in the pipeline.

Chinese Premier Li Keqiang said last month the government has additional monetary policy measures that it can take, and will even cut “its own flesh” to help finance large-scale tax cuts.

On the trade front, US President Donald Trump said on Friday talks with China were going very well, but cautioned he would not accept anything less than a “great deal” after top US and Chinese trade officials wrapped up two days of negotiations in Beijing.