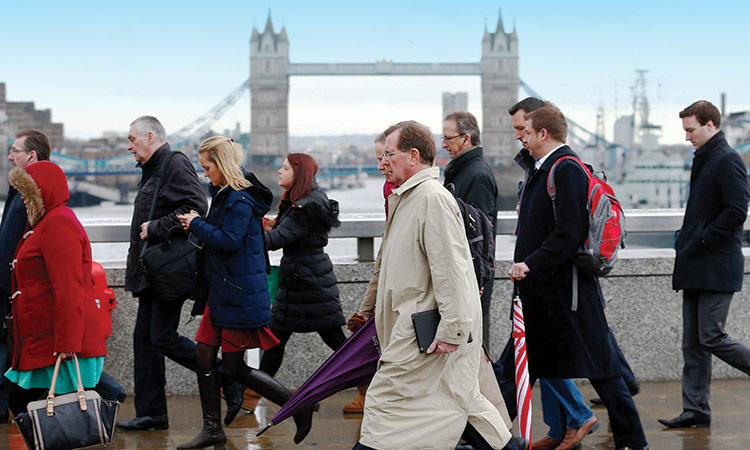 Commuters walk across London Bridge to the City of London. Reuters

LONDON: Britain’s balance of payments shortfall grew in the last few months of 2018, exacerbated by disappointing trade numbers as the world economy slowed and Brexit neared.

The difference between money flowing in and out of Britain was negative to the tune of 23.7 billion pounds ($30.9 billion)in the fourth quarter, bigger than a 23.0 billion-pound deficit in the third quarter, the Office for National Statistics said.

Bank of England Governor Mark Carney has said the big current account deficit leaves Britain reliant on “the kindness of strangers”. That could be a risk as the country prepares to leave the European Union still with no clarity on whether it can smooth its exit with a transition period. At 4.4 per cent of economic output, the shortfall in late 2018 was the biggest since just after the Brexit vote more than two years earlier, dashing hopes that the fall in the value of the pound after the referendum could boost Britain’s economy.

Prime Minister Theresa May said on Wednesday she would step down after her Brexit divorce deal is secured. But it remains unclear if the deal she agreed with other EU leaders can pass parliament and lawmakers have so far rejected alternatives. The balance of payments not only includes trade of goods and services, but also the money flowing in and out of the country in the form of investments.

The larger current account deficit was due to weaker earnings for British investors from overseas holdings, and a deteriorating trade deficit, which widened for the fourth quarter in a row, the ONS said on Friday. Both drivers of the deficit probably reflected a marked slowdown in the world economy over the last couple of quarters. “An elevated shortfall is a potential source of vulnerability for the UK economy − particularly if there was any major loss of investor confidence in the UK for any reason, most obviously Brexit concerns,” economist Howard Archer, from the EY ITEM Club Consultancy, said.

Britain’s economy has slowed since the 2016 Brexit referendum and lost more of its momentum late last year as the departure from the EU approached. For 2018 as a whole, the ONS confirmed the economy grew by 1.4 per cent, the weakest expansion for any year since 2012. Companies in particular have shown nervousness about the lack of clarity. The ONS data showed business investment fell by 0.9 per cent in the fourth quarter, a shallower drop than a previous estimate of a 1.4 per cent fall but still the fourth quarter in a row to show a contraction. That was the worst such run since the financial crisis a decade ago. Consumers appear to be less fazed. Data from the Bank of England showed household spending stayed subdued but still growing in early 2019.

Mortgage lender Nationwide said house prices picked up a little bit of speed this month but the market remained weak. The ONS confirmed a previous estimate that Britain’s economy grew by a quarterly 0.2 per cent in the October-December period. Growth was driven by spending by the government and households although the latter grew at the weakest quarterly pace in a year, up just 0.3 per cent.

The pound gained on Friday on growing hopes of support for British Prime Minister Theresa May’s last-gasp attempt to win backing from lawmakers for her Brexit deal but was still on track for its biggest monthly drop in five months.

Britain was supposed to have left the European Union on Friday but Brussels let London delay its departure while May battles to try to secure a consensus on how and when to leave the bloc. The rising uncertainty has battered sentiment towards the pound after some optimism that the United Kingdom would successfully avoid crashing out of the EU without a deal bolstered the British currency in recent weeks.

“Even if she manages to win the vote today, which looks like a very long shot, the uncertainty over the pound will remain,” said a trader at a European Bank in London.

Parliament will vote on a stripped-down version of May’s twice-defeated divorce deal agreed with Brussels on Friday. Even if she wins, another vote will be required for Britain to legally exit the EU and the uncertainty is dismaying investors.

Britain’s attorney general said the vote was the last opportunity for Britain to take advantage of its legal right of delaying Brexit until May 22. Should the deal not be approved the Brexit delay will expire on April 11, Geoffrey Cox said.

The stance of Northern Ireland’s Democratic Unionist Party, which props up May’s minority government, has been that it cannot back a Brexit divorce deal that does not protect the whole of the United Kingdom, and the DUP said on Friday that “still stands and is our position”.