German jobless rate touches a record low of 4.9 per cent 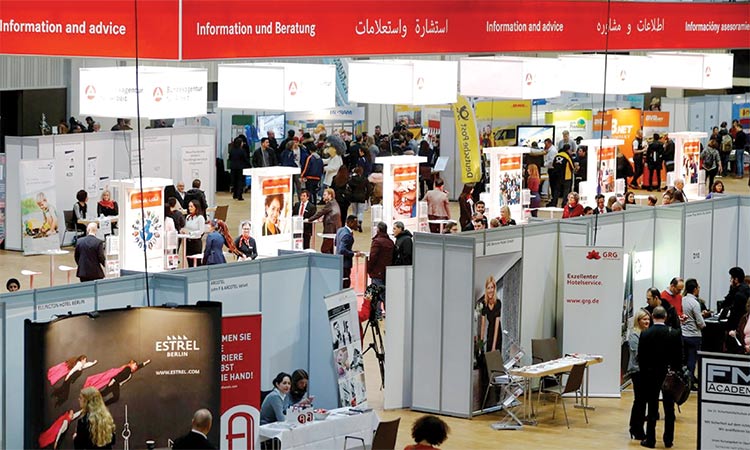 BERLIN: Germany’s unemployment rate hit a new record low in March and retail sales rose on the month in February, data showed on Friday, in a boon for expectations that private consumption will support growth in Europe’s largest economy this year.

Domestic demand is expected to be the sole driver of growth this year in Germany, traditionally an export-driven economy, as exporters face a global slowdown, trade disputes and uncertainty related to Britain’s expected departure from the European Union.

Data from the Labour Office showed the unemployment rate dropped to 4.9 per cent in March from 5.0 per cent, hitting the lowest since German reunification in 1990.

The number of people out of work decreased by 7,000 to 2.231 million, seasonally-adjusted data showed. That compared with the forecast for a drop of 10,000.

Separate data from the Federal Statistics Office showed retail sales - a volatile indicator often subject to revision - rose by 0.9 per cent on the month in February, confounding expectations for a drop of 0.9 per cent. They increased by 4.7 per cent on the year.

But a GfK survey earlier this week dampened spirits by showing consumer morale deteriorated unexpectedly heading into April, with propensity to buy dropping to its lowest level in more than two years.

The economy narrowly avoided a recession last year and the Ifo institute earlier this month slashed its 2019 growth forecast for the German economy to 0.6 per cent from 1.1 per cent due to weaker foreign demand for industrial goods and increased headwinds for exporters. The Economy Ministry has said the economy had a subdued start to 2019 and probably grew only moderately in the first quarter.

German retail sales rose by 0.9 per cent on the month in February, lifted by more than expected in fresh positive news for Europe’s largest economy after it narrowly avoided a recession last year.

A Reuters poll had pointed to a month-on-month fall of 0.9 per cent. Sales rose by 4.7 per cent on the year, marked by strong growth of 9.2 per cent in online and mail order purchases, Germany’s Federal Statistics Office said in a statement. Household spending has become a key growth driver in recent years as Germans benefit from record-high employment and low borrowing costs but retail sales are a volatile indicator often subject to revision.

In another positive sign from the economy, business morale improved unexpectedly in March after six consecutive drops, a survey showed on Monday.

Meanwhile the German and French government bond yields were poised on Friday for their biggest monthly falls since June 2016, ending a month where heightened anxiety about global growth prospects has caused a flood into fixed income globally.

Ten-year bond yields across the single currency bloc were marginally higher in early trade, reflecting a firmer tone in world stock markets on hopes that Washington and Beijing are making progress in trade talks.

Still, borrowing costs in Germany, the Netherlands and France remained close to 2-1/2 year lows hit this week as signs that the European Central Bank is considering ways to limit the impact of negative interest rates on banks triggered new bond buying.

“We have moved a lot in the last two weeks so there is a bit of pause for now,” said Pooja Kumra, European rates strategist, TD Securities.

German and French 10-year bond yields are down around 25 basis points each this month, set for their biggest monthly falls since June 2016 − when Britain voted in favour of leaving the European Union, rattling world markets.

Early on Friday, the German 10-year Bund yield was marginally higher on the day at minus 0.06 per cent, holding within sight of 2-1/2 year lows hit this week.

Having dropped below zero per cent for the first time since 2016 a week ago, Bund yields were also set to end the quarter down around 30 bps in their biggest quarterly fall in three years.

Data on Friday showed French inflation fell in March more than expected to hit its lowest point in more than a year, reinforcing a view of a benign inflation outlook. Wouter Sturkenboom, chief investment strategist for EMEA at Northern Trust, said he expected bond markets to stabilise from here. “The growth outlook for the eurozone is not as bad as markets are anticipating and we think the Bund yield also reflects some safe-haven element,” he said.

The sharp falls in the eurozone have been matched in equal measure by peers across the world - US and Australian 10-year bond yields are down over 30 basis points each this month, reflecting concern about recession risks facing the world economy as well as uncertainty surrounding Brexit.