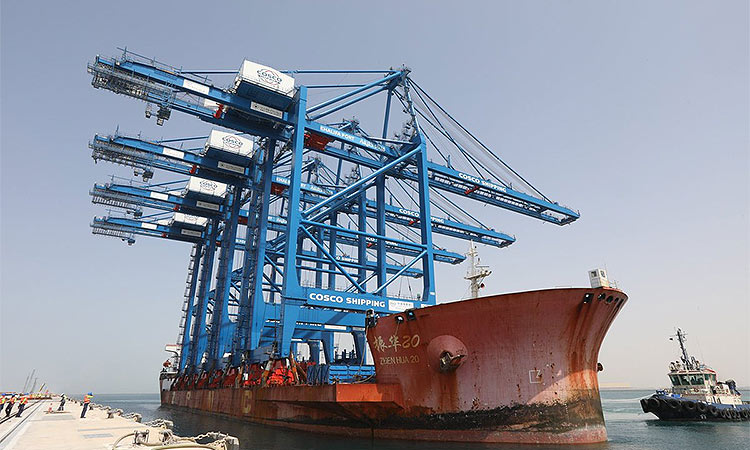 ABU DHABI: The value of exports through Abu Dhabi ports increased by 36.6 per cent from Dhs12.6 billion in Q4 2017 to Dhs17.2 billion in the same period of 2018, according to the figures released by Statistics Centre — Abu Dhabi.

This was as a result of increases in the value of the business sector and government by 25.6 per centand 1,297.7 per cent respectively, while the value of the individual sector decreased by 19.2 per cent over the same period.

This was the result of decreases in the value of the business sector by 11.0%, while the government sector and individual sector increased by 187.6 per cent, and 35.8% respectively at the same time.

‘Pearls, precious or semi-precious stones, imitation jewelry’, ‘Vehicles, aircraft and associated transport equipment’ and ‘Live Animals; Animal Products’ were the most significant export products of the individual sector, and represented 91.9% of the total. Goods of ‘Vehicles, aircraft and associated transport equipment’, ‘Live Animals; Animal Products’ and ‘Textiles and textile articles’ represented 69.6% of the total imports for the same sector.

Headed by Mohammed Saif Al Suwaidi, Director-General of ADFD, the delegation toured the palace, comprising hallways, and exhibitions that celebrate the region’s rich Arabic heritage as well as the UAE’s rulers and governing institutions.

At the Qasr Al Watan library, the ADFD delegation learned that the library’s collection of over 50,000 books was the largest resource of its kind in the fields of arts, science, research, and culture within the UAE.

On the occasion, Al Suwaidi said, “The visit to the Qasr Al Watan and its library is aligned with our policy of promoting reading among our employees and also aims to create employee engagement opportunities to shape a cohesive community.”

In meeting the objectives of the UAE Vision 2021, he said, the Qasr Al Watan library is an important repository of knowledge in Abu Dhabi, its valuable and rare books can be viewed and browsed using the latest techniques, ensuring an integrated reading experience.

Abu Dhabi Fund for Development is a national organisation owned by the Abu Dhabi government. Established in 1971, its purpose is to help emerging countries by providing concessionary loans to finance sustainable development projects alongside other long-term investments and direct contributions. In addition, the Fund manages government grants offered by the Abu Dhabi government and monitors the course of the relevant projects. To date, it has invested around AED84 billion in development projects across 88 countries.