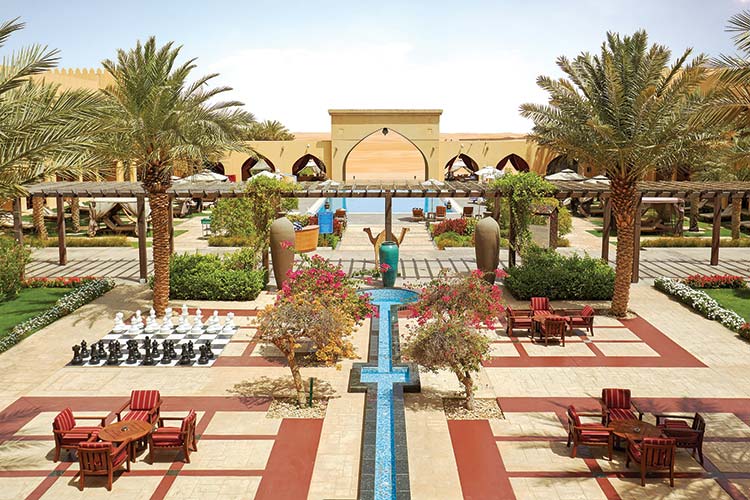 ABU DHABI: With its numerous traditional villages that are enormously rich in Emirati heritage and culture, the Liwa Oasis has a huge potential to become the most important eco-tourism destination of the country. The area which has recently witnessed a huge boost in tourist numbers, also credits the luxurious diversity of the deserts in the Rub’ al Khali also known as the ‘Empty Quarter’.

The General Manager of Tilal Liwa Hotel, Ahmed Margoushy said the hotel has become one of the emerging destinations for eco-tourism and recreational tourism in the Liwa area, one of the most photogenic locations of the nation, largely thanks to its views of the dramatic dunes during the day and the starry expanse of sky unmarred by city lights at night. With no next-door neighbors aside from wild gazelles, the property is self-sustaining. It is as if Tilal Liwa Hotel is a lonely island within the Empty Quarter’s sea of sand.

The hotel in itself is a tribute to Arabia, with its structure resembling a desert fortress, traditional and warm Emirati hospitality, and its ability to blend seamlessly with nature. Ahmed Margoushy commented, “Those who make the journey here are a mix of expats in the UAE looking for a relaxing weekend, and local Emirati families escaping the flash and rampant development of the cities.” He stressed that the Empty Quarter is one of the world’s rare mostly unexplored regions. At more than 255,000 square miles, the Rub’ al Khali is a wilderness larger than some countries, but distinctly lacking anything that isn’t sand. In fact, it’s the largest expanse of sand in the world, its skyscraping dunes and otherworldly salt flats characterized by the beauty and tranquility from being untouched by human inhabitance.

Tilal Liwa Hotel guests can delight with personalised recreational activities that includes visits to neighbouring camel and horse farms, an equestrian club, and thrilling bus safaris. With an increased focus on families, Tilal Liwa Hotel has introduced targeted offers across its accommodation and dining facilities that comprise of memorable evenings teeming with barbecue stations, live entertainment and vibrant bonfire nights. The times spent with children preparing pizza, frolicking in the play areas, face painting, and engaging with the resident clown are unmatched.

Also catering to the youth, the hotel provides adventure enthusiasts with exclusive opportunities to embark on desert cycling expeditions, sunrise safaris, camel riding, horseback riding, and sank skiing. Moreover, challenge loved ones to games of giant chess along with the wide variety of hotel amenities available for guests of all ages. The General Manager noted, “In the first quarter of 2019 alone, Tilal Liwa Hotel has recorded a 65 per cent occupancy rate and expect even higher figures during upcoming holidays and school vacations”.

With Ramadan just around the corner, Margoushy announced the appointment of Tilal Liwa’s newest Arabic Chef who specializes in Middle Easter cuisine, and Ramadan specialties. The exquisite and lavish Iftars and Suhours will be prepared using the finest produce sourced from farms across the Liwa region. The address will also be promoting its MICE facilities, even hosting some international meetings during the Holy Month.

Margoushy commended the Department of Tourism and Culture Abu Dhabi, who’s efforts were detrimental in stimulating tourism in the region, promoting hotels that focus on preserving Emirati heritage, and establishments that reflect the enriched history of the nation. Leading events by the likes of Al Dhafra Festival and the Liwa Date Festival have also contributed in the increase of interest in the destination, attracting scores of visitors all year around.  The hotelier also praised the Abu Dhabi government and the leadership, for providing the Madinat Zayed area with the most advanced infrastructure, including the development of roads adhering to international standards. Additionally, the roads are completely lighted up at night making it largely convenient for guests. The highly anticipated opening of schools, a shopping mall, and a Lulu Shopping Centre expected at the beginning of the Holy Month of Ramadan, makes the region ideal for stable family living. Moreover, the entire city is powered with solar energy sourced from the Shams Solar Power Station, making this feat a historic achievement for the Abu Dhabi emirate.

He added, “The Liwa Region has consistently been in line with the highest standards of sustainability in order to protect the environment and lower its carbon footprint. Contributing to the movement is Tilal Liwa Hotel, that is home to its very own water recycling plant, where the water produced is used for agricultural and miscellaneous purposes”.