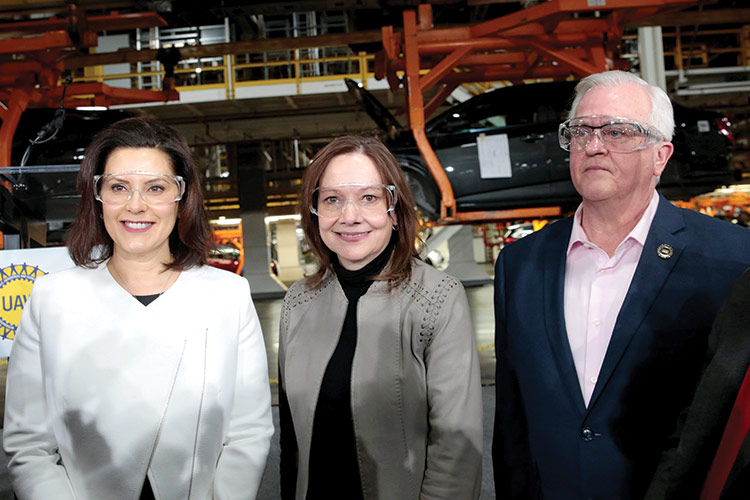 Mary Barra with Michigan Governor Gretchen Whitmer and UAW union VP Terry Dittes at the GM Plant in US. Reuters

The largest US automaker has come under heavy criticism from President Donald Trump in recent days over its decision to end production at its Lordstown, Ohio, assembly plant earlier this month.

GM CEO Mary Barra made the announcement at a meeting involving UAW officials and a range of elected officials, including Gov. Gretchen Whitmer and US Rep. Elissa Slotkin, who gathered at the 4.3 million-square foot plant in Lake Orion, Michigan, which employs about 1,166 people.

“GM is absolutely committed to investing in and growing good-paying manufacturing jobs in the United States,” Barra said, part of an implicit response to President Donald Trump’s attacks on the company’s move to idle its factory in Lordstown, Ohio.

A company statement said the announcement was part of GM’s “new commitment to invest a total of $1.8 billion in its United States manufacturing operations, creating 700 new jobs and supporting 28,000 jobs across six states.” Barra declined to release any details about the new EV or timing on the investment. A GM spokesman said the $1.8 billion investment will unfold over the next two to three years, likewise so will the investment in Orion.

GM officials said the announcement was planned well before Trump’s series of angry GM tweets that started on Saturday. Trump called GM CEO Mary Barra on Sunday to urge her to reverse the decision to end production at the Ohio plant, which is in a crucial state for the 2020 presidential election. He again ripped the company in a speech in Ohio on Wednesday.

Barra, speaking to reporters after an event at the plant in Orion Township, outside Detroit, with Michigan Governor Gretchen Whitmer announcing the investment, said GM is focused on ensuring that all of the hourly workers at Lordstown find new jobs at other plants. But she has shown no indication it will reverse course and reopen the Lordstown plant.

She declined to say if she thought there was more tension between GM and Trump. “We want to create jobs, good paying jobs,” Barra said, saying her talks with Trump had a “business focus.” She said GM needs to remain “strong” in order to continue to add jobs.

Reuters reported on Thursday on GM’s investment plans for the plant.

Last year, GM said it would end production at five North American assembly plants and eliminate about 15,000 jobs, prompting outrage and a two-day visit by Barra to Capitol Hill to answer questions about the job cuts.

The automaker said in total it is investing $1.8 billion in its US manufacturing operations this year, creating 700 new jobs and supporting 28,000 jobs across six states.

Additional product information and timing for the new Chevrolet EV will be released closer to production.

Barra said after event that GM “supports” the proposed United States, Mexico and Canada Agreement “and we are making adjustments because we will comply” with new rules requiring additional North American content.

In February, GM disclosed that it had hired Ballard Partners, a lobbying firm run by Brian Ballard, a fundraiser for Trump’s presidential campaign. The company has been eager to try to smooth over relations with the White House after Trump first began harshly attacking GM last year.

Barra vigorously defended GM’s US investments during the announcement, but UAW leaders also told Barra and the Orion factory workers that the union will hold GM accountable.

Orion hourly worker Chrissy Clason said the news is “wonderful. We always seem to get bad news.” She said when GM said it would idle four US plants, it was scary and the investment in Orion provides “a little bit of job security for us.” But GM’s production cuts elsewhere loomed over the celebration. Clason said her cousin worked at Lordstown and was lucky to get transferred to GM’s plant in Flint, which builds the Chevrolet Silverado and GMC Sierra pickups.

The Detroit carmaker has been the target of harsh criticism since Nov. 26, when it announced its plan to idle five plants in North America this year and early next year, affecting some 6,200 jobs. GM has said the cuts are part of its restructuring _ which also included cutting 8,000 white-collar jobs _ and will save it $2.5 billion this year.