UK shoppers keep on spending ahead of Brexit - GulfToday 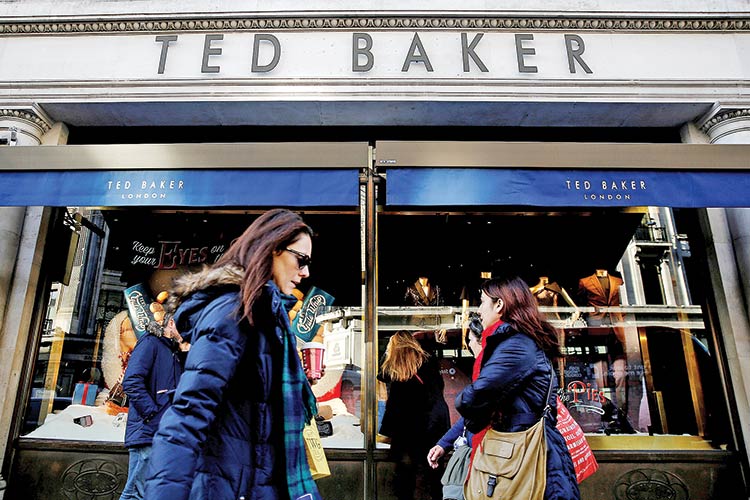 Shoppers walk past a Ted Baker store on Regents Street in London. Reuters

LONDON: British retailers racked up surprisingly strong sales last month, reinforcing how spending by consumers is a bright spot for the economy ahead of Brexit. Retail sales grew by an annual 4.0 per cent in February, the top end of a range of forecasts by economists in a Reuters poll, and down only slightly from January’s two-year high of 4.1 per cent, official data showed on Thursday.

Mild weather last month boosted spending at garden centres and on sporting equipment, offsetting a fall in spending at supermarkets and in clothing stores after sales promotions in January, the Office for National Statistics said. Sterling pared some early losses on the news.

“It is possible that some consumers brought forward purchases amid concern prices could rise if a disruptive Brexit at the end of March sees sterling weaken sharply,” Howard Archer of economic consultancy EY ITEM Club said. Consumer spending has been a source of strength for the world’s fifth-largest economy at a time when businesses say that Brexit uncertainty is forcing them to postpone investment and a slower global economy is hurting export demand.

Annual sales growth for the three months to February was its strongest in over two years. Falling inflation, a steady rise in wages and the lowest unemployment since 1975 have all boosted household incomes over the past year, though wages are still below their peak before the financial crisis after factoring in inflation.

Earlier on Thursday, British clothing chain Next reported a small fall in annual profit, hurt by lower store sales, and it forecast another decline for this year, but said Brexit was not to blame.

Meanwhile the Ted Baker reported its first drop in annual profit since the 2008 financial crisis, highlighting tough conditions on Britain’s high streets, as the fashion retailer faces life without its founder.

Ray Kelvin, who developed the Ted Baker brand and had been CEO since the company’s launch in 1988, resigned last month after an investigation into “forced hugging” and “a culture that leaves harassment unchallenged.”

Kelvin, who denies all allegations of misconduct, remains the biggest shareholder. Ted Baker had already warned last month that full-year earnings would miss forecasts due to volatile exchange rates, higher costs and a writedown on inventory.

Shares in the group, known for suits, shirts and dresses with quirky details, were down 2.9 per cent at 1002 GMT, having hit their lowest on Thursday since a January boost from a reassuring Christmas trading update.

“The fashion house has been under pressure recently due to the tough trading environment, and the management shake-up might add to the existing uncertainty,” CMC Markets analyst David Madden said.

Ted Baker said it was investigating its policies, procedures and the handling of staff complaints and would reach conclusions early in the second quarter.

Acting Chief Executive Officer Lindsay Page told Reuters the board was determined to learn from what has happened.

“One thing that we did do was implement a revamped hot line where if people had any grievances to bring forward they were able to do that,” Commercial Director Phil Clark said.

When asked about Kelvin’s involvement in the business, Page said the retailer’s engagement with its founder would be as it would be with any major shareholder. Ted Baker has said it is looking to appoint a successor to Kelvin.

Annual retail sales rose 4.2 per cent to 461 million pounds including its online business, the company said.

“These are turbulent times for Ted,” George Salmon, Equity Analyst at Hargreaves Lansdown, said. “Tellingly, in-store sales densities in the key UK, European and US markets are falling, and with the group having to cut prices to stay competitive, margins have gone into reverse.”

Ted Baker will spend part of a 31 million pounds budget to expand in Belgium, Germany and the United States in 2019.

The group has about 560 stores and concessions globally.

The company, which opened its first store in Glasgow in 1988, said it remained confident in its spring and summer collections.

It also said it had come up with contingency plans to minimise disruptions caused by Brexit, including forming a group to work with external advisers to identify the main risks.