Stocks wilt as US Fed shift sparks stampede into bonds 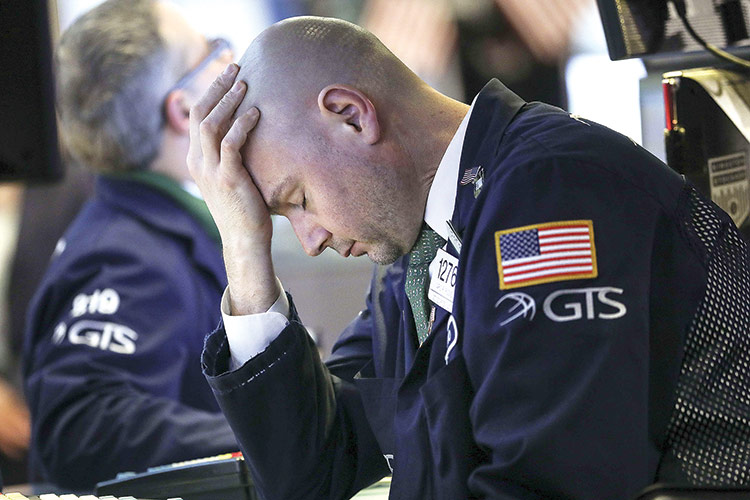 A trader reacts on the floor of the New York Stock Exchange on Thursday. Agence France-Presse

LONDON: European shares wilted and there was a stampede into bonds on Thursday, after the US Federal Reserve›s abandonment of all plans to raise rates this year left traders wondering what might be lurking in the shadows.

World markets’ reaction to a super-dovish Fed was not unlike the response to the European Central Bank’s equally easy stance earlier this month - the benefits of a reduced interest rate horizon came laced with doubts.

Banks suffered their usual worries about low borrowing rates to drag the pan-European STOXX 600 down 0.2 per cent, though London›s FTSE edged up as its miners were lifted by higher copper and metals prices.

The real action was in the bond markets.

With investors rushing to price in the prospect of US rate cuts later this year, benchmark Treasury yields dived to their lowest since early 2018 and those on German Bunds - Europe›s benchmark - to the lowest since October 2016.

Ten-year Bund were offering buyers virtually nothing again at just 0.048 per cent interest. Alongside widespread ‹curve› flattening - where shorter and longer-term borrowing costs converge - there were alarm bells ringing Rabobank strategist Philip Marey said the worry is that, having cut rates to the bone and already tried full-scale money printing, many central banks are now low on traditionally ammunition to fight recessions.

«The Fed has the most leeway because it has raised rates nine times so it could cuts rates nine times,» Marey said. «But it will be much more difficult for other central banks which haven›t even started to hike yet.» The Fed›s swerve had sent the dollar sliding as far as 110.47 yen, with its 0.6 per cent loss overnight the biggest drop since the flash crash of early January.

That all left the dollar at 96.100 against a basket of currencies, having lost 0.5 per cent overnight. It was also poised precariously on its 200-day moving average, and a sustained break would be taken as technically ‹bearish›.

«The downward pressure on US yields continues to support our outlook for a weaker US dollar this year,» said MUFG analysts in a note.

MSCI›s broadest index of Asia-Pacific shares outside Japan was up 0.5 per cent.

Chinese blue-chips, which spent the morning swinging between small losses and gains, were up 0.4 per cent in afternoon trade, while Seoul›s Kospi also added 0.4 per cent as regulators announced plans to cut the stock transaction tax this year.

Australian shares ended flat after see-sawing throughout the day. A drop in the jobless rate tempered market expectations of a rate cut.

Markets in Japan were closed for a public holiday.

Gains in the broad Asian index followed a wobbly session on Wall Street, after a move toward risk taking sparked by the Fed›s dovish shift was overtaken by growth and trade concerns.

US President Donald Trump on Wednesday warned that Washington may leave tariffs on Chinese goods for a «substantial period» to ensure Beijing›s compliance with any trade deal.

China-U.S. trade talks are set to resume next week.

Weakness in oil prices is seen to be limited by efforts led by the Organization of the Petroleum Exporting Countries (Opec) to curb supply. Widely watched US data also showed supplies were tightening.

Gold and copper gained though on the weaker dollar, with spot gold adding about 0.5 per cent to $1,318.94 per ounce. Copper rose 0.9 per cent to $6,517 a tonne, having touched a near three-week high earlier in the session.

Oil held near 2019 highs on Thursday, supported by tightening US stocks and declining output from key producers due to Opec production cuts and US sanctions on Iran and Venezuela.

Crude prices have been pushed up by almost a third since the start of 2019 by supply cuts led by the Organization of the Petroleum Exporting Countries, as well as sanctions enacted against Iran and Venezuela by the United States.

The drop in production has led to a tightening in global inventories. Vienna-based consultancy JBC Energy estimated stocks had run down by a «solid» 40 million barrels since mid-January.

That followed a 10-million-barrel fall in US crude stocks last week, the largest drop since last July, boosted by strong export and refining demand, according to the US government›s Energy Information Administration (EIA).