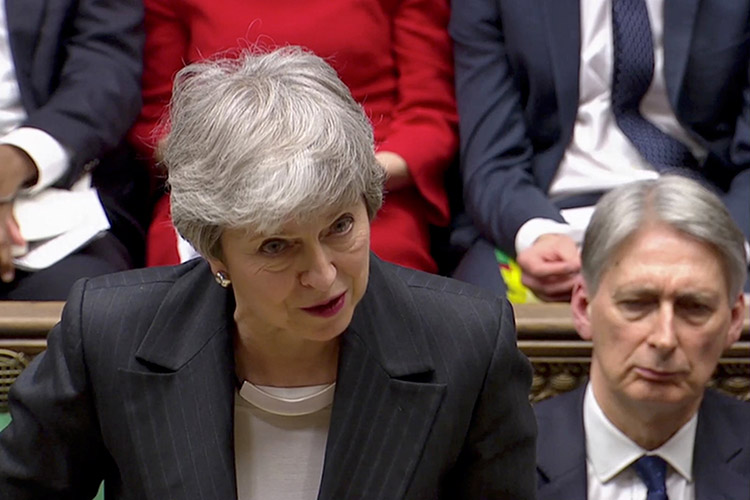 Theresa May speaks at the Parliament on Wednesday. Reuters

London: The pound fell sharply on Wednesday after British Prime Minister Theresa announced seeking a delay to its exit from the European Union until June 30, while investors awaited the US Federal Reserve›s interest rate call. The move by the premier was greeted with harsh response by the British opposition. The Labour Party leader, Jeremy Corbyn, called it a betrayal of the British people.

“The pound’s Wednesday only got worse after the confirmation that Theresa May is seeking a short delay from the EU, one that arguably does not give the government enough time to get through a sterling-positive Brexit deal,” Spreadex analyst Connor Campbell told AFP.

“It appears that, despite the various votes highlighting MPs unwilling to leave the EU without a deal, that kind of disastrous exit is still very much on the table.” The pound lost about half a pence in the space of roughly 10 minutes after May announced the delay, bringing its loss for the day to around one per cent.

May had been widely expected to ask the bloc for an extension of the March 29 deadline for leaving, having seen her exit proposals killed off by MPs.

The European Commission, for its part, warned EU leaders in an internal briefing note ahead of an summit in Brussels that delaying Brexit to June 30 would bring ‘serious legal and political risks’.

It urged a shorter postponement to before European Parliament elections in May, or a much longer one to at least the end of this year.

“This is the only way of protecting the functioning of the EU institutions and their ability to take decisions,” said the commission note, which was prepared before May›s request for a delay until June 30.

Wall Street opened without much change.

“US stocks are hovering near the unchanged mark as investors tread water ahead of the afternoon release of the Fed’s rate decision,” said analysts at Charles Schwab brokerage.

Investors also eyed China-US trade talks, optimism about which have helped propel equities higher across the world this year − offsetting concerns about the outlook for the global economy, But dealers have been spooked by a report that some US officials are feeling some pushback from China on a number of demands, including on the crucial issue of intellectual property.

The unnamed negotiators said the Chinese side was growing concerned at the lack of assurances that US duties would be removed, according to the Bloomberg story.

In Europe, Frankfurt fell the heaviest with Bayer shares tumbling after a US jury ruled its weedkiller Roundup was a ‘substantial factor’ in an amateur gardener’s cancer.

Frankfurt stocks meanwhile sank 1.5 per cent as the threat to German giant Bayer and its subsidiary Monsanto from US litigation swelled.

A wave of lawsuits has put pressure on Bayer since its $63-billion takeover of Monsanto last year, spooking investors who worry damages payouts could escalate if the firm fails to convince courts its product is safe.

“This could open the floodgates to further cases, and the group might have to set aside vast sums of money for potential cases.” The news sent Bayer shares nosediving roughly 11.5 per cent to 61.69 euros in afternoon trading.

Meanwhile, Toyota Motor Corp and Suzuki Motor Corp on Wednesday said they planned to produce electric vehicles (EVs) and compact cars for each other to better compete with fast-changing technologies in the global auto industry.

The agreement follows an initial R&D tie-up announced by Japan’s No. 1 and No. 4 automakers in 2017, and will see more vehicles produced by Suzuki for Toyota, one of the world›s biggest carmakers.

Although Suzuki is far smaller, it is a dominant force in the fast-growing Indian market.

The two automakers have been pooling their strengths.

Toyota is a leader in hybrid technology and is investing heavily in automated driving, while Suzuki specialises in affordable compact cars. Many automakers have struggled to keep pace with ballooning investment in EVs and self-driving cars.

Under the latest agreement, Suzuki will source gasoline hybrid systems for cars it sells worldwide from Toyota, which pioneered hybrid vehicles with the Prius more than 20 years ago, the companies said in a joint statement.

In return, Suzuki will produce two compact models for Toyota in India based on its Ciaz and Ertiga models.

The deepening partnership between the two automakers will enable cost-conscious Suzuki to tap into Toyota›s R&D firepower to develop lower-emission vehicles and self-driving cars - areas which Suzuki has admitted it is struggling to keep up.