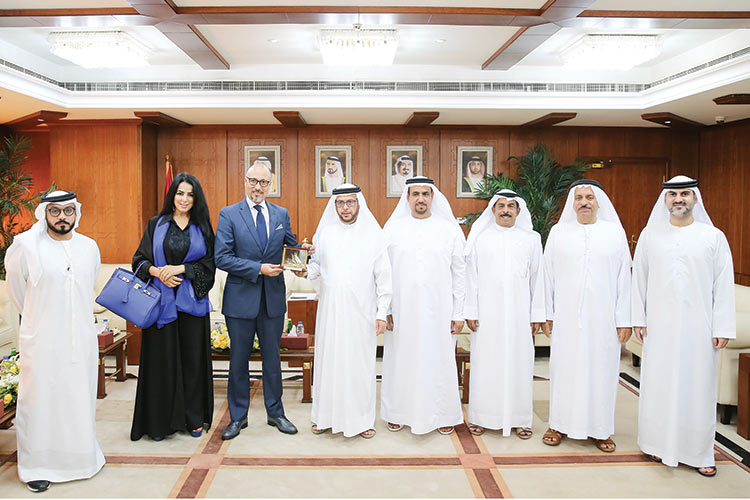 Abdul Rahim Rahali, Consul General of the Kingdom of Morocco, during his visit to the Ajman Chamber.

Ajman: Abdullah Al Muwaiji, Chairman of the Ajman Chamber of Commerce and Industry (ACCI), received Abdul Rahim Rahali, Consul General of the Kingdom of Morocco, to explore the ways of strengthening the economic cooperation and the opportunities for partnership and investment available in the two sides.

During the meeting, Al Muwaiji praised the historical brotherly relations between the UAE and Morocco in general. He also stressed the importance of the meeting and its role in increasing the existing cooperation and creating various investment opportunities for the investors of both parties.

He briefed the delegation on the emirate’s most important sectors, highlighting efforts of the wise leadership to provide an attractive business climate that ensures Ajman’s economic competitiveness.

They also discussed the participation of a high-level delegation from the Kingdom of Morocco in the Future Build Exhibition, which will start on March 25th in Al-Zorah area. The exhibition stands an opportunity to enhance the cooperation between the companies participating in the exhibition within the Moroccan delegation, which will comprise a number of government officials and owners of companies specialised in construction and real estate development, the attendees said.

Speaking during the meeting, Abdul Rahim Rahali briefed the attendees on the most important economic opportunities in the Kingdom of Morocco, especially in the tourism, agricultural and industrial sectors. He emphasised that Morocco has become a preferable hub for the leading companies thanks to its safe and attractive environment for capital and the various ingredients of its economic policy.

The two sides stressed the need to participate in the events and specialised exhibitions held in the two countries to ensure direct communication between the public and private sectors and to optimally make use of the opportunities available in various fields.

At the end of the meeting, Abdullah Al Muwaiji presented the memorial shield of the Ajman Chamber of Commerce and Industry to Abdul Rahim Rahali.

Ajman Chamber of Commerce and Industry was incorporated under an Ameri Decree issued by late H.H. Sheikh Rashid Bin Hmaid Bin Rashid Al Nu’aimi in 1977, stipulating that the chamber of commerce and industry shall be a legal entity with an independent financial status practicing such authorities and powers invested to it under the provisions of the law applicable in the emirate, and that it shall have full competence to achieve its objectives.

The chamber is regarded as one of the most important establishments and departments serving the private sector as it acts on representing the economical interests of the establishments and the individuals of the said sector in an aim to develop and enhance its economical roles through providing various services and by representing the said sector’s interests before governmental authorities, in addition to providing support and handling any problems and difficulties facing the sector.