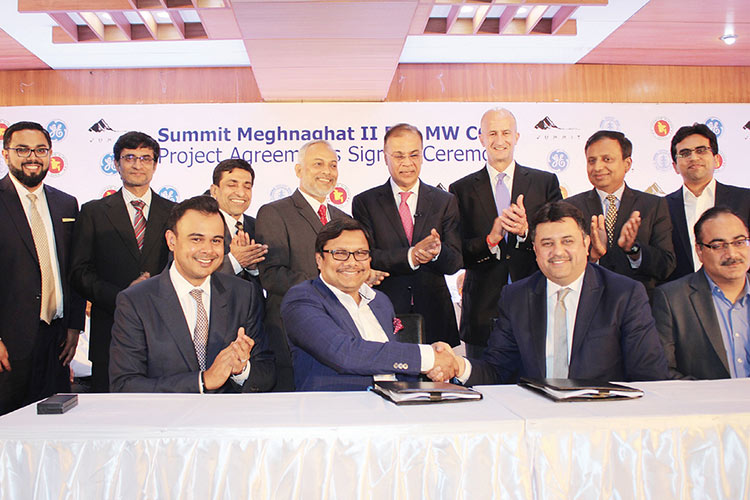 Officials during the signing ceremony in Dhaka.

Adhering to their commitment to provide reliable and affordable electricity in Bangladesh, Summit and GE Power announced they will proceed with the co-development of Summit Meghnaghat II, a 583 MW combined cycle gas power plant at Meghnaghat, near Dhaka.

The announcement follows the signing of a 22-year Power Purchase Agreement (PPA) between Summit Meghnaghat II Power Company Limited (SMIIPCL), a subsidiary of Summit Group, and the Bangladesh Power Development Board (BPDB).

SMIIPCL also signed several other agreements, with the Government of Bangladesh, Power Grid Company of Bangladesh (PGCB), Bangladesh Petroleum Corporation (BPC) and Titas Gas Transmission and Distribution Company Limited. The power plant is expected to be operational by 2022 and will generate the equivalent electricity needed to supply up to 700,000 homes in Bangladesh.

Summit and GE Power signed the equipment and engineering, procurement, and construction (EPC) scope of the project in 2017, while the services agreement was signed in 2018. Together, the two agreements are worth approximately $390 million.

“The phenomenal growth of Bangladesh in the last decade has established Bangladesh as a role model. Summit is proud to have played a role in it. With today’s 583 MW project, Summit embarks upon investing four billion dollars in the next five years to help eradicate poverty, create employment and support Bangladesh to achieve SDGs,” said Muhammed Aziz Khan, Founder Chairman of Summit Group.

GE Power will be providing the turnkey solution for the Summit Meghnaghat II power project, and is responsible for the design of the facility, supply and installation of the equipment and commissioning works. The equipment being provided by GE includes one 9HA.01 gas turbine, one heat recovery steam generator (HRSG), one steam turbine generator, condenser and associated systems, as well as balance of plant (BOP) solutions.

Additionally, GE will provide services including the maintenance and repairs of the power generation equipment at the facility for a period of 20 years, helping to sustain the efficiency, reliability, performance and availability of the plant. It will also result in a higher plant load factor (PLF) of the facility over the years, ensuring the lower cost of generation of electricity.

“Bangladesh’s power sector is undergoing a transformational shift as the Government takes conducive policy decisions and actions to meet the targeted 40 GW of installed power capacity by 2030,” said Deepesh Nanda, CEO, Gas Power Systems, GE South Asia. “GE’s long-term association with Summit is a testimony to our efforts to support this transformation by introducing advanced, innovative solutions into Bangladesh’s energy ecosystem. This will contribute towards providing uninterrupted access to electricity to all, benefiting households, businesses and industries across the country,” he added.

Summit is amongst the largest independent power producers (IPP) in Bangladesh, generating close to 2 gigawatts (GW) for the national grid. The company’s relationship with GE dates back more than a decade, with GE’s 9E and 9F gas turbines currently powering Summit’s 335 MW Meghnaghat I and 341 MW Bibiyana II combined cycle power plants, respectively. Summit is committed to bringing advanced technology to Bangladesh’s power sector and has chosen GE’s HA fleet to equip its upcoming power plants in the country.

GE’s HA technology has now helped to deliver two world records - one for powering the world’s most efficient combined cycle power plant, based on achieving 63.08 percent gross efficiency at Chubu Electric Nishi-Nagoya Power Plant Block-1 in Japan and another for helping EDF’s Bouchain Power Plant achieve 62.22 percent net combined cycle efficiency in France. As such, it is recognized for record-setting efficiency in both the 60 hertz and 50 hertz segments of the global power market. Moreover, the turbines deliver industry-leading operational flexibility, contributing to increased dispatch and ancillary revenue, and exceptionally low life-cycle costs per megawatt.

Today, GE Power’s HA gas turbine technology has achieved more than 270,000 operating hours across more than 30 units in operation, with 86 orders of the technology from more than 35 customers in 16 countries globally, including in the Gulf Cooperation Council (GCC) region. In the UAE, the technology is being adopted by the Sharjah Electricity and Water Authority (SEWA) for an upcoming 1.8 gigawatts independent combined cycle power project located in Hamriyah, Sharjah. Aluminium Bahrain B.S.C. (Alba) has also adopted the technology to equip Power Station 5 (PS 5), setting benchmarks for sustainable power generation in the aluminium industry.