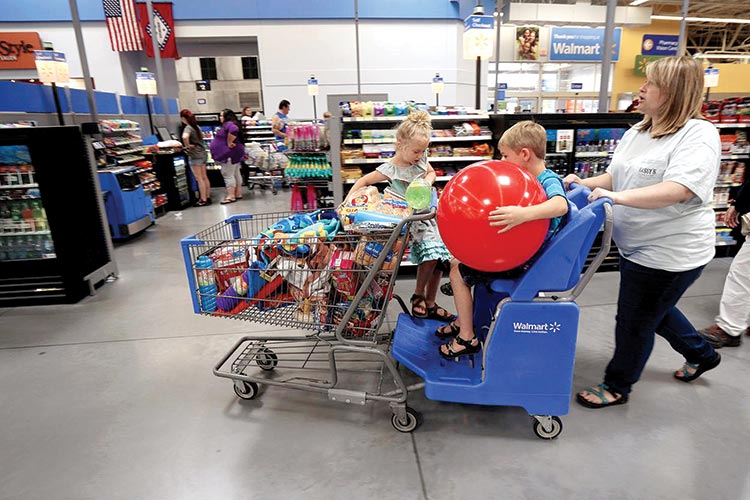 Shoppers at the Wal-Mart Supercenter in Springdale, Arkansas. Reuters

Wages are ticking up. The labour market is robust. But consumers are giving the kind of mixed messages that drive economists and retail executives batty. Will they or won’t they spend in 2019? The latest figures from the US Department of Commerce offered a sliver of insight. After a rocky ride through a government shutdown and stock market turmoil, retail sales rose a slight 0.2 per cent in January, a measurable improvement following a deep 1.6 per cent drop in December, when holiday spending should have been in full throttle.

“Although some hesitancy is still lingering,” economist Jack Kleinhenz of the National Retail Federation said in a statement, “it is good to see consumer spending showing traction, given the concerns on the minds of American families last month.”

Consumer spending still fuels the nation’s economic engine, and retail sales are a window into our willingness to shop and eat out at restaurants. It’s a key gauge of how people feel about their personal finances in the moment.

Minnesota’s marquee retailers, Target Corp. and Best Buy Co. Inc. rode out of 2018 with strong sales online and in stores. Both companies have spent years investing in store operations to hold down online delivery costs, keep their merchandise fresh and provide improved training and pay for their workers. Convinced that the foundation of a strong jobs market will buttress household spending, leaders at both companies forecast modest comparable sales growth in the coming year. Best Buy’s high-end estimate is 2.5 per cent, while Target’s peak outlook is in the midsingle digits.

Target Corp. CEO Brian Cornell said in a recent interview that the uptick in store traffic during the fourth quarter convinced him that consumers aren’t tapping too hard on the brakes despite recent uncertainties.

“While changed,” Cornell said, “consumer confidence is still pretty high.” Indeed, after three straight months of declines, consumer confidence hit its highest mark in 18 years in February, according to the Conference Board, which conducts a monthly assessment of consumers’ short-term outlook on income, business and labour market conditions.

The boomerang around this closely watched measure of consumer perceptions reflects a postrecession mind-set _ one that is easily spooked by instability. Housing values and the stock market have recovered, but vast swaths of Americans haven’t made up lost ground during the past decade.

Consumers may be waiting for the other shoe to drop.

“There’s a general sense in the market that a recession has to be around the corner, but I don’t necessarily think that’s so,” said analyst Ken Perkins, founder of the research firm Retail Metrics. “The labour market has been strong, the consumer has a little more in their pocket, gas prices are low. The underpinnings for spending should be good.”

The overhang, Perkins said, is massive student debt among younger consumers that is delaying purchases of homes and other big items. Retailers rely on younger generations to power sales as they launch careers, set up their own homes and start families.

“You’ve got a lot of young consumers who would love to buy a car, buy a house,” Perkins said. “But there’s this massive student debt. That’s really worrisome.”

There are signs that people are having trouble paying their bills.

Economists saw a red flag in a February report that found a record 7 million Americans are 90 days or more behind on auto-loan payments. Car loans are typically the first to be paid because people need their cars to get to work. Most delinquent loans come from people with low credit scores who are under 30, the Federal Reserve Bank of New York reported.

Such rumblings of economic anxiety are creating contradictory trends, say the leaders of Ginger Consulting in Minneapolis.

With clients such as Target, Nordstrom, Starbucks and Keurig, the brand strategy and research firm has been querying a group of 250 women in 10 major US markets for nearly a decade.

A recent annual survey found shifting economic agendas of the women they refer to as “household CEOs.”

Two-thirds of women say they are doing “very well,” up about 8 percentage points from two years ago. Yet only 40 per cent are comfortable with a splurge, a notable drop from 2016 when more than three-quarters said they could handle a spendy vacation or new furniture.

“Women have become permanently prudent about their money,” said Ginger’s Beth Perro-Jarvis. “She’s finally clawed her way out of debt and she’s not going back.”