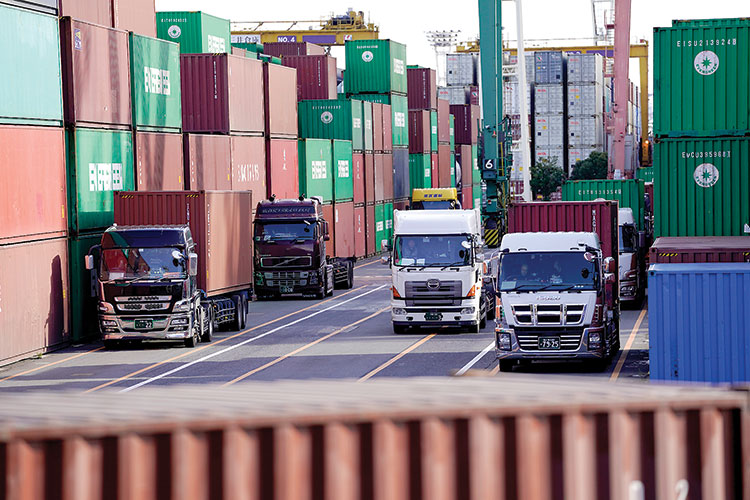 Japan’s exports fell for a third month in February in a sign of growing strain on the trade-reliant economy, suggesting the central bank might be forced to offer more stimulus eventually to temper the effects of slowing external demand and trade frictions. Slowing global growth, the Sino-U.S. trade war and complications over Britain’s exit from the European Union have already forced many policymakers to shift to an easing stance over recent months.

Japan is in a similar situation to much of the rest of the world, where factories have slammed on the brakes and business confidence has plummeted in the wake of rising global economic uncertainty.

Ministry of Finance data showed on Monday exports fell 1.2 per cent year-on-year in February, more than a 0.9 per cent decrease expected by economists in a Reuters poll. It followed a sharp 8.4 per cent year-on-year drop in January, marking a third straight month of falls due to drops in shipments of cars, steel and semiconductor production equipment.

“Exports will remain in a declining trend for the time being, which could curb capital spending and wages. Domestic economy will face a severe situation ahead of October’s sales tax hike.”

The trade data comes on top of a recent batch of weak indicators, such as factory output and a key gauge of capital spending, which have raised worries that Japan’s record run of postwar growth may come to an end. Some analysts say a recession cannot be ruled out.

The Bank of Japan last week cut its view on exports and output, while keeping policy unchanged.

Yet, extended weakness in exports could put it under pressure to deliver more easing, especially as inflation remains well off its 2 per cent target and pressure on businesses and consumers continues to rise. In the post-policy press conference last week, BOJ Governor Haruhiko Kuroda acknowledged the challenges the economy faced but gave no indication there would be any additional stimulus. But Kuroda may have to change tack in the face of a run of weak economic indicators.

Many in the BOJ expect Japan’s economy to emerge from the current soft patch in the second half of this year, assuming China’s stimulus plans can revive demand there. The biggest worry among BOJ policymakers is that weakening exports and output will hurt corporate sentiment, prompting firms to delay capital expenditure and wage hikes.

However, overall trade to the Asian giant remained weak, as even after averaging effects of the Lunar New Year holiday, China-bound shipments declined 6.3 per cent in the January-February period from a year earlier.

Seasonally-adjusted overall trade values rose 6.7 per cent month-on-month in February, the strongest rise in two years. Export volumes fell 0.6 per cent in the year to February after the previous month’s 9.0 per cent decline.

“Shifts in the timing of Chinese New Year partly explain the sharp swings in trade volumes at the start of the year so the recent strength in export volumes may unwind before long,” said Marcel Thieliant, senior Japan economist at Capital Economics.

“We still think that net trade will remain a drag on GDP growth both in the first quarter and throughout 2019.” Japan’s shipments to Asia, which account for more than half of overall exports, fell 1.8 per cent, down for a fourth straight month. US-bound exports rose 2.0 per cent, but imports from the United States grew 4.9 per cent, resulting in Japan’s trade surplus with the country declining 0.9 per cent year-on-year to 624.9 billion yen ($5.60 billion) in February.

In February, Japanese auto exports to the United States rose just 0.5 per cent year-on-year to 152,198 units in February, with the value of shipments down 6.8 per cent.