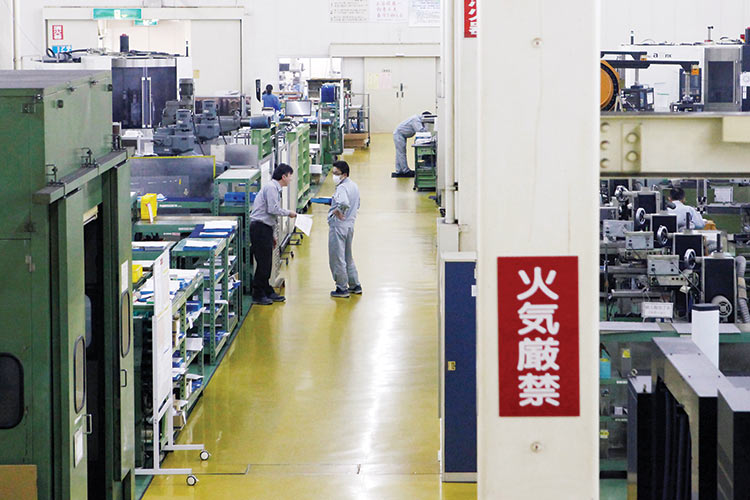 Employees inside a factory in Jyoetsu, Japan. Reuters

The Bank of Japan (BOJ) kept monetary policy steady on Friday but tempered its optimism that robust exports and factory output will underpin growth, a nod to heightened overseas risks that threaten to derail a fragile economic recovery.

Factories across the globe slammed on the brakes last month as demand was hit by the US-China trade war, slowing global growth and political uncertainty in Europe ahead of Britain’s departure from the European Union.

In a nod to the increased risks, the BOJ cut its assessment on overseas economies to say they are showing signs of slowdown. It also revised down its view on exports and output.

“Exports have shown some weaknesses recently,” the central bank said in a statement on its policy decision, offering a bleaker view than in January when it said they were increasing as a trend.

At a two-day rate review ending on Friday, the BOJ maintained a pledge to guide short-term interest rates at minus 0.1 per cent and 10-year government bond yields around zero per cent. The widely expected decision was made by a 7-2 vote.

“The sharp deterioration in exports and industrial production should be a serious source of concern for the BOJ. I think the BOJ is doing some thought experiments about what they can do,” said Masayuki Kichikawa, chief macro strategist at Sumitomo Mitsui Asset Management.

“For now you can still make the argument that current economic weakness is temporary, but this is becoming an increasingly closer call. The next three months are critical.”

Many in the BOJ expect Japan’s economy to emerge from the current soft patch in the second half of this year, when Beijing’s stimulus plans could lift Chinese demand and underpin global growth, sources have told Reuters.

But there is uncertainty on how quickly global demand could rebound, adding to woes for Japanese companies already feeling the pinch from slowing Chinese demand, analysts say. The BOJ faces a dilemma. Years of heavy money printing have dried up market liquidity and hurt commercial banks’ profits, stoking concern over the rising risks of prolonged easing.

And yet, subdued inflation has left the BOJ well behind other major central banks in dialling back crisis-mode policies, leaving it with little ammunition to battle the next recession.

While BOJ Governor Haruhiko Kuroda insists that hitting 2 per cent inflation remains a top priority, politicians and economists are increasingly expressing doubts about the target as the strains from years of ultra-low rates accumulate.

About two-thirds of economists recently polled by Reuters believed the optimal target for Japan’s consumer inflation was around 1 per cent.

Finance Minister Taro Aso said on Friday “things could go wrong” if the BOJ insisted too much on achieving 2 per cent inflation. “No one in the public would be angry even if the inflation target isn’t achieved,” he told reporters.

The biggest worry among BOJ policymakers is that weakening exports and output will hurt corporate sentiment, prompting firms to delay capital expenditure and wage hikes.

“The BOJ will keep insisting that the economy continues a moderate recovery, unless there are clear signs Japan is falling into recession,” said Hiroshi Shiraishi, senior economist at BNP Paribas Securities, adding that the hurdle for additional easing is “quite high.”

“That said, we expect the BOJ to eventually be forced into easing around the middle of next year when world economy faces a downturn.”

There was little impact on the market from the Bank Of Japan’s decision to keep monetary policy steady.

China’s economy is facing additional downward pressure but Beijing will not let economic growth slip out of a reasonable range, Premier Li Keqiang told reporters on Friday at end of the annual parliament meeting.