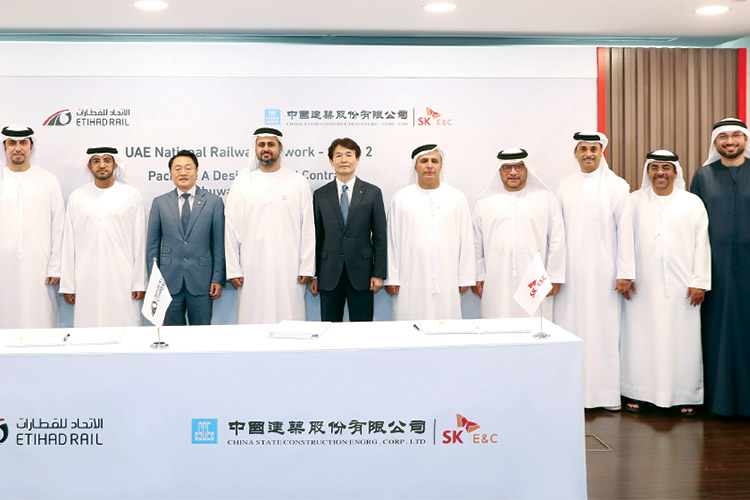 Etihad Rail, the developer and operator of the UAE national railway, held a Board meeting, led by Sheikh Theyab Bin Mohamed Bin Zayed Al Nahyan, Member of the Abu Dhabi Executive Council and Chairman of Etihad Rail, during which he approved Package A of the Stage Two tender award.

The package includes all design and build, civil and track works of the 139-kilometer Package A of Stage Two of the UAE national rail network to connect Ruwais with Ghuweifat on the UAE border with Saudi Arabia. Stage Two, when complete, will run for 605 kilometers from Ghuweifat to the Port of Fujairah.

Sheikh Theyab expressed his extreme delight at the rapid progress being made on the project, referring to the contract announcement as a major milestone passed in the organization’s mission to create the UAE’s modern, sustainable and cost-efficient national railway.

“With the commencement of this first phase of Stage Two, we are reaching a major turning point in the transportation sector in the UAE and GCC. Pioneering and innovative, this initial link is just the beginning, as Etihad Rail expands its network to improve all aspects of freight transport across our border and around the region, placing the UAE at the centre of regional goods movement as a global logistics hub.”

Etihad Rail is working diligently and efficiently towards awarding contracts for the rest of Stage Two over the coming months. He also thanked the Abu Dhabi Government, local and federal government authorities across the Emirates for their support of this national project.

Package A of Stage Two, valued at Dhs1.5 billion, will focus on the design and construction of rail infrastructure, including earth-works, bridges, tunnels, animal crossing, track-laying, and linking with Stage One of the network. The 139km route will feature standard-gauge double track that will be built using 1.3 million tonnes of ballast, over 400,000 concrete sleepers, and 33,000 tonnes of iron rail.

When complete, the 1,200km Etihad Rail project will link the UAE’s principal centres of industry, manufacturing, production, population, and import/export points, forming an integral part of the GCC-wide railway network.

Meanwhile, Etihad Rail organised a ceremony at its headquarters in Mirfa, in the Al Dhafra Region, to receive the Flame of Hope for the Special Olympics World Games 2019, which are being hosted in the UAE from March 14th. The event was attended by the CEO of Etihad Rail and the CEO of Etihad Rail DB, along with a number of employees of both companies.

Etihad Rail is proud to be one of the landmark projects on the Flame of Hope tour; as such a prestigious Olympic symbol represents the highest values of friendship, tolerance and peace. The UAE is sending out a message of tolerance and humanity to the world by hosting the events of the Special Olympics World Games, one of the most important and inclusive sporting events for people of determination.

The choice of Etihad Rail’s operations headquarters as a part of the Flame of Hope tour reflects the importance of the project, a major national endeavour linking all of the emirates and connecting the UAE with the GCC.

A select group, called «Guardians of the Flame of Hope», is carrying the flame during its tour of various landmarks across the emirates, consisting of Special Olympics athletes and hundreds of police officers from around the world.

The Flame of Hope has now reached Abu Dhabi in preparation for the opening ceremony of the Special Olympics World Games 2019, which will be hosted in Abu Dhabi from March 14 to 21 as the world›s largest unified and inclusive sporting event.

It may be mentioned that Etihad Rail was established in June 2009 under Federal Law No. 2, with the mandate to manage the development, construction and operation of the UAE’s national freight and passenger railway network. The railway network will link the principal centres of population and industry of the UAE, and will form a vital part of the planned GCC railway network across the GCC.

Etihad Rail has successfully completed Stage One of the network. Stage One has been operational and delivered on schedule and within budget. The route spans 264km, transporting sulfur from sources at Shah and Habshan to the export point at Ruwais. Stage Two links the United Arab Emirates and Saudi Arabia from Fujairah to Al Ghuweifat through Mussafah, Khalifa Port and Jebel Ali Port. Built to international standards, Etihad Rail’s state-of-the-art network will span approximately 1,200 km, acting as a catalyst for economic growth and sustained social development. Upon completion, the railway will redefine logistics and transport in the region, providing a modern, safe, efficient and sustainable mode of transport that will connect all regions of the UAE to its neighboring GCC countries.