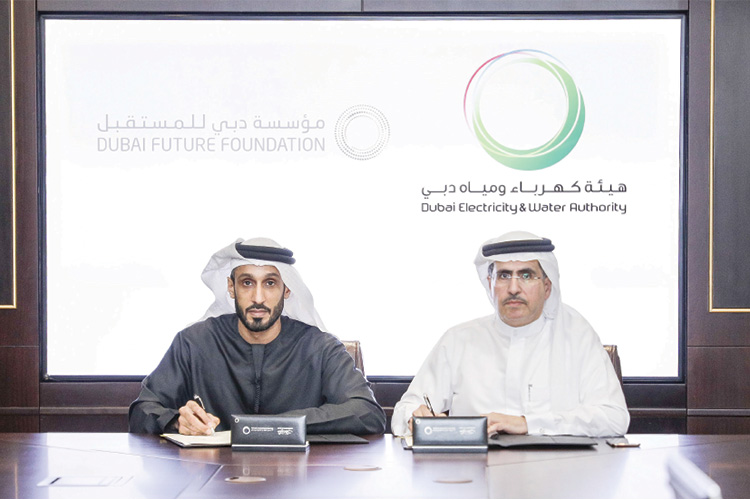 The Dubai Electricity and Water Authority (Dewa) signed a memorandum of understanding (MoU) with the Dubai Future Foundation (DFF) to design, construct, and operate a solar photovoltaic (PV) plant to annually produce 4,000 megawatt hours of renewable energy required to operate the Museum of the Future, which is designed to meet LEED Platinum rating for green building standards.

The MoU was signed by Saeed Mohammed Al Tayer, Managing Director & CEO of Dewa; and Khalfan Juma Belhoul, CEO of Dubai Future Foundation; in the presence of senior representatives from both sides.

“We continue to work in line with the vision of His Highness Sheikh Mohammed Bin Rashid Al Maktoum, Vice President and Prime Minister of the UAE and Ruler of Dubai, to make Dubai the city with the lowest carbon footprint in the world by 2050 and provide 75 per cent of the Emirate’s total power output from clean energy sources by achieving the goals of the Dubai Clean Energy Strategy 2050. Through this agreement with Dubai Future Foundation, we are keen to strengthen cooperation between various government entities, to elevate Dubai’s position across all fields. Dewa follows integrated strategies, plans, and innovative frameworks to adopt latest technology solutions and systems to achieve sustainable development,” said Al Tayer.

“The Museum of the Future will showcase the latest and most innovative solutions and advanced technologies to address global challenges and anticipate the future, presenting what the world will look like in the coming decades as well as being a touristic and urban landmark in Dubai. The MoU with Dewa comes in line with Dubai Future Foundation’s eagerness to employ modern technology and strengthen Dubai’s position as a world leader in building the future and serving humanity,” said Belhoul.

The Japeanese delegation included Nobumitsu Hayashi, Deputy Governor of JBIC, and Naoki Tamaki, Chief Representative for the Middle East from the Representative Office in Dubai at JBIC.

Al Tayer briefed the visiting delegation on Dewa’s major projects, initiatives, and programmes, highlighting the Authority’s experience in anticipating and shaping the future of energy by innovating a model for future utilities in the production, transmission, and distribution of electricity and water.

He discussed Dewa’s achievements, adding that the utility is making over Dhs86 billion of investments in the next five years to meet the growing demand for electricity and water in the Emirate. Dewa’s extensive efforts resulted in the UAE, represented by Dewa, maintaining its global first ranking for the second consecutive year, with scores of 100 per cent in all Getting Electricity indicators in the World Bank’s Doing Business 2019 report.

Al Tayer explained that Dewa is building the Mohammed bin Rashid Al Maktoum Solar Park. It will have a production capacity of 5,000 megawatts (MW) by 2030, with total investments of Dhs50 billion, to achieve the objectives of the Dubai Clean Energy Strategy 2050 to provide 75 per cent of Dubai’s energy from clean energy by 2050 and transform Dubai into a global centre for clean energy and green economy.

He stressed that Dewa is a pioneer in managing projects based on the IPP model through which it has achieved world-class results, setting new global records for low power prices per kilowatthour (kWh); leading to long-term stable energy prices for customers in Dubai.

In support of this, Dewa adopted innovation and prioritised it in its strategy by using the disruptive technologies of the Fourth Industrial Revolution such as artificial intelligence, unmanned aerial vehicles, energy storage, data protection, blockchain, and big data to achieve this.