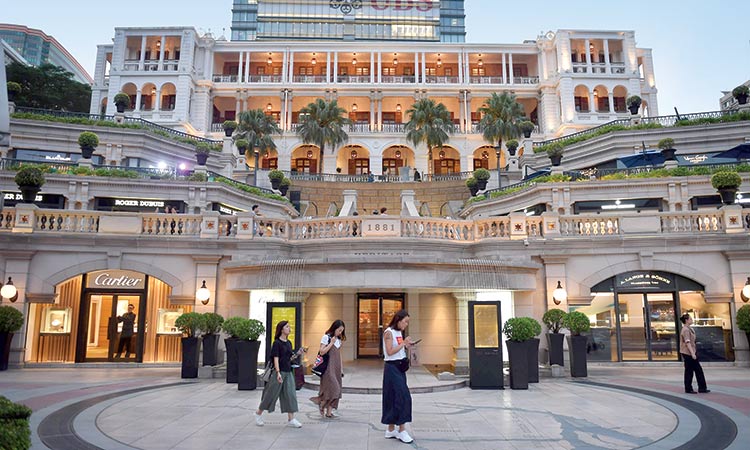 Luxury brands are likely to retreat from Hong Kong as the city is wracked by protests at a time when wealthy Chinese shoppers are staying on the mainland, consultancy Bain said, highlighting a shift that is reshaping the global industry.

Sales growth for companies making goods like jewellery, high-end fashion or handbags would come in at the low end of its expectations in 2019 due to the Hong Kong turmoil, according to Bain, which produces closely-followed forecasts for the sector.

Global luxury goods sales were on course to expand to 281 billion euros ($310 billion) in 2019, its study showed, growing 4% at constant currencies, at the bottom end of its previous 4% to 6% forecast and down from 6% growth last year.

Luxury brands, which have around 1,000 stores in the Asian shopping hub, are likely to start shutting some permanently, Bain said.

“Local customers cannot sustain the 1,000 stores in the mid-term,” said Federica Levato, a partner at Bain in Milan.

Luxury sales in Hong Kong, which hit a peak of 10 billion euros in 2013, are likely to drop to 6 billion in 2019, Bain said. This would mean the city that once accounted for around 5% of global sales is now closer to 2%.

And while the demonstrations might be a temporary disruption, a more structural shift is at play in the shopping habits of well-off customers from the Chinese mainland whose Hong Kong spending have long been buttressed sector sales.

Despite China’s economic slowdown, shoppers are continuing to spend heavily on luxury - but they are increasingly staying at home because of a weaker yuan currency that has blunted their overseas firepower. Meanwhile Beijing has cut import duties and sales tax, eroding the competitive price advantage of foreign destinations like Hong Kong, London and New York.

Chinese shoppers now making up 35% of all industry sales - and they are on course to account for 90% of growth in the market this year, Bain said.

“They are willing to go on credit to buy luxury goods,” said Levato. “For the moment we don’t see a true economic risk linked to China.”

In another significant trend for global luxury, Bain said jewellery sales were on track to grow by 9% at constant currencies in 2019, making this one of the fastest-growing pockets of the industry - and highlighting a major driver for LVMH’s $16.2 billion takeover of Tiffany.

Meanwhile, airlines that fly to and from Hong Kong will be able to keep their prized airport slots even if they temporarily cut capacity due to weak travel demand through March, according to the Hong Kong Civil Aviation Department.

Many airlines, including flagship home carrier Cathay Pacific Airways, South African Airways and Malaysia’s AirAsia Group Bhd have cut flights to and from Hong Kong temporarily as a result of sometimes violent anti-government protests that have led to a sharp fall in tourist and business travel demand.

More than 5,800 people have been arrested since the unrest broke out in June over a proposal to allow extraditions to mainland China, the numbers grew in October and November as violence escalated.

Under more normal conditions, it is tough for airlines to get take-off and landing slots at Hong Kong’s airport because it lacks capacity until a third runway will come into operation in 2024.

A “use-it-or-lose-it” rule stipulates an airline normally only keeps slots out of historic precedence if it can demonstrate it used them at least 80% of the time in the previous airline scheduling season.

Hong Kong’s Civil Aviation Department said in a statement to Reuters on Thursday evening that in order to provide airlines with greater flexibility in aircraft deployment to deal with the fall in passenger demand, the “use-it-or-lose-it” rule had been temporarily suspended for the winter season.

Airport Authority Hong Kong reported declines in October of 13% in passengers and 6.1% in the number of inbound and outbound flights - the steepest falls since the unrest began.

Cathay Pacific plans to cut passenger flight capacity by 1.4% next year, reversing an earlier plan for a boost of 3.1% because of a challenging business outlook, an internal memo reviewed by Reuters showed.

The capacity reduction follows Cathay Pacific cutting its second-half profit guidance earlier this month, the second cutback in less than a month, because of anti-government protests that began in Hong Kong in June that have discouraged travel to the city.