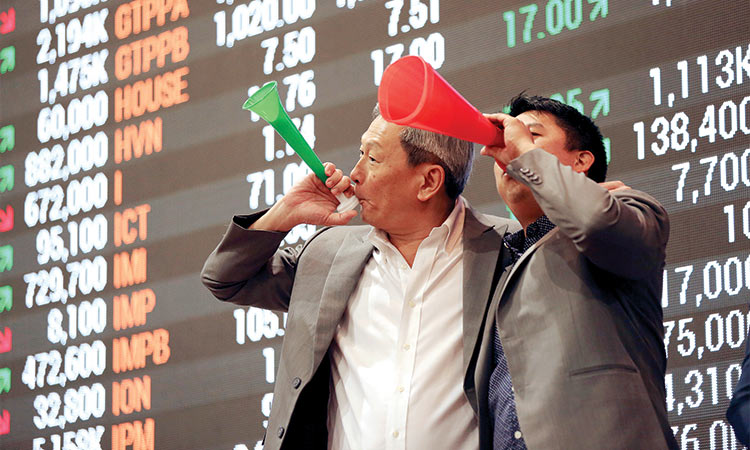 Traders blow horns during a function at the Philippine Stock Exchange in Manila. File/Associated Press

Singapore still leads on overall first-time share sales in Southeast Asia in 2019, but it has achieved this mainly through offerings of real estate companies and business trusts.

Asset World made its market debut on Thursday, with shares trading 0.83% higher than its IPO price at 6.05 baht each. The company plans to use proceeds to double hotel rooms and retail space.

The home furnishing retailer, owned by the Philippines’ richest man, Manuel Villar, raised 12.937 billion pesos ($250.4 million). An option to sell 168.75 million over-allotment shares could beef up the IPO to $285 million.

“The home improvement industry in the Philippines is under penetrated so we thought of introducing a retail concept with global standards which eventually complements our expertise as the largest homebuilder in the country,” Villar, AllHome’s chairman, said in a statement.

AllHome operates 27 stores and plans to at least double its selling space by end-2020.

Asset World Corporation was the largest IPO by a Thai firm, while AllHome was the Philippines’ biggest in three years.

In Thailand, 11 companies raised a total of $1.9 billion from January to Oct.4, compared with five firms raising less than $100 million in the same period a year ago, Refinitiv data showed. The data excludes real estate and business trusts.

“We expect Thailand to be one of the stronger IPO markets in 2020. Some more large IPOs have started preparations this year and are set to list next year,” said Ho Cheun Hon, head of Southeast Asia equity capital markets at Credit Suisse. He said international fund managers continued to be attracted by the growth in consumption across Southeast Asia.

Half of Asset World Corporation’s shares were subscribed by 13 cornerstone investors, including Singapore sovereign wealth fund GIC, which put in about $300 million.

Bankers said the 2020 deal pipeline for Thailand included fund raising by a unit of the country’s biggest retailer Central Group, a retail arm of oil company PTT  and others.

Bangkok Commercial Asset Manager, which handles distressed debt, has also filed to list, offering a niche business as there are only two publicly traded debt collectors in Thailand.

“Thai institutions and retail investors are more focused at home and there is a lot of capital looking for good investments,” SCB Executive Vice President Veena Lertnimitr said.

AllHome hired UBS as the sole global co-ordinator, and joint bookrunner with CLSA and Credit Suisse. China Bank Capital and PNB Capital are the local underwriters.

Asia Pacific economies are expected to slow this year due to uncertainty around US-China trade tensions and slowdowns in major global economies could further hurt the region’s exports, a World Bank report said on Thursday.

The report highlights the weakening global demand and heightened uncertainty that led to a decline in exports and investment growth, and points out that increasing trade tensions pose a long-term threat to regional growth.

Countries with proximity to China as manufacturing centres will see limited benefit in the short term as trade tensions and global uncertainties intensify, the World Bank said.

The Washington-based lender said that faster-than-expected slowdowns in China as well as in Europe and the United States could further weaken demand for the region’s exports.