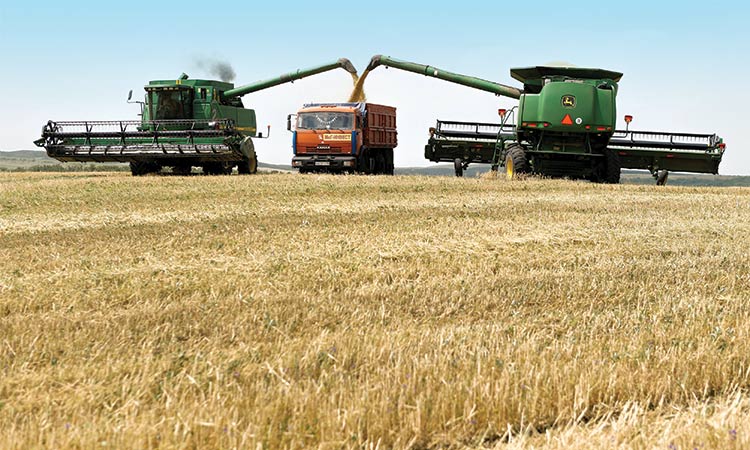 Combine harvesters are used at a wheat field in Stavropol, Russia. Reuters

Major grain traders in Russia have agreed to create a new exporters’ association led by a state-controlled firm, increasing the government’s influence over supplies from the world’s biggest wheat exporter.

Russia’s agriculture ministry has been meeting regularly with big exporters since September to monitor exports amid a lower 2018 crop. In February, it asked the industry to set up a new grain exporters’ union, saying that would help it to better understand the needs of the market.

Eduard Zernin, deputy chief executive of Russia’s state grain trader the United Grain Company (UGC), will head up the new association, the founders said in a statement on Tuesday, a copy of which has been reviewed by Reuters.

Membership of the new association, called the Russian Union Of Grain Exporters, is important for traders who want to keep attending the agriculture ministry’s meetings with exporters, where it updates them on its view of Russian grain supplies.

The ministry previously said it would start discussing with traders in April Russia’s export plans for the 2019-20 marketing season, which starts on July 1.

Russia’s grain supplies abroad could play a key role in President Vladimir Putin plan, announced a year ago, to increase the country’s exports of agricultural products to $45 billion by 2024. That is a big challenge for the agriculture ministry, which is overseeing the initiative, as agricultural exports totalled $26 billion last year, including $10 billion of grain.

However, some traders have expressed concern the new association may lack independence, and could worsen the ministry’s understanding of the real situation in the market.

“The Russian government sets up a new grains association and then a state-controlled company heads it up. The question really has to be raised about government control,” said a German trader. “This all looks very strange, if a country is seeking more state control over a sector this is what it would do.”

The association’s founders include Russia’s two largest grain traders - Russian firm RIF and the local grain office of global trade giant Glencore, as well as Aston and a subsidiary of UGC.

“Its creation will help to improve the coordination of grain exporters among themselves and with government authorities,” the founders said in their statement.

The agriculture ministry welcomed the new association. “The ministry hopes that the union will soon be able to unite all the major market participants who will take the most active part in working with the ministry to improve the regulatory framework, strengthen control over the quality and safety of grain, and increase the export potential of the industry and other areas,” it said.

Meanwhile, Russia is confident it can soon resolve a problem of polluted Russian oil contaminating a major pipeline serving Europe and affecting supplies as far west as Germany, a senior official said on Friday at talks with importers about the issue.

Russian Deputy Energy Minister Pavel Sorokin did not give a precise timeframe but Moscow has previously said it would pump clean oil to the border with Belarus from April 29, seeking to end a crisis hitting the world’s second-largest crude exporter.

Sorokin was speaking at talks with officials from Belarus, Poland and Ukraine in Minsk on the issue. Belarus said the issue had cost it $100 million, while analysts say alternative supply routes for refiners cannot fully fill the gap. Poland, Germany, Ukraine and Slovakia have suspended imports of Russian oil via the Druzhba pipeline. Halting those supplies has knock-on effects further along the network.

The problem arose last week when an unidentified Russian producer contaminated oil with high levels of organic chloride used to boost oil output but which must be separated before shipment as it can destroy refining equipment.

Russia’s Energy Ministry said pipeline monopoly Transneft and other Russian companies had a plan to mitigate the effects of the contaminated oil. It did not give details.

Russian officials have said contaminated oil has already been pumped into storage in Russia and Friday’s talks would focus on how to partially withdraw the tainted crude from the Druzhba pipeline running via other countries.

The suspension cuts off a major supply route for Polish refineries owned by Poland’s PKN Orlen and Grupa Lotos, as well as plants in Germany owned by Total, Shell, Eni and Rosneft.

Some refiners have outlined plans for alternative supplies, but analysts say other routes cannot meet the shortfall.

Ukraine’s Ukrtransnafta suspended the transit of oil through the pipeline on Thursday, closing supplies via Druzhba’s southern route to Slovakia, the Czech Republic and Hungary.