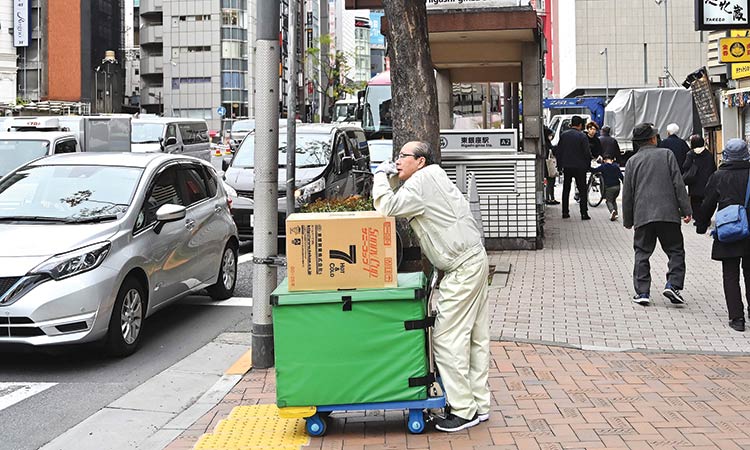 A delivery man waits at a pedestrian crossing in Tokyo. Agence France-Presse

Japan will forge ahead with a planned sales tax hike to 10 per cent in October, likely knocking the economy into contraction in the fourth quarter, a Reuters poll showed.

Tokyo has twice postponed raising the sales tax from 8 per cent but Prime Minister Shinzo Abe has repeatedly said the hike would be proceeded this time.

To blunt its economic impact, the government has earmarked about 2 trillion yen ($18 billion) in spending.

Forty of 41 economists expect the levy will be raised as scheduled, according to the poll, which was conducted April 2-11.

“There are no reasons to postpone the tax hike at the moment,” said Takumi Tsunoda, senior economist at Shinkin Central Bank Research Institute.

He pointed out the 2014 tax increase, from 5 per cent to 8 per cent, was larger and said the government’s proposed steps to cushion the blow are “significant.”

Still, there is speculation Abe may delay the hike a third time even if Japan isn’t hit by a major economic blow, as was the case in 2016, when he postponed it a second time.

At that time, Abe laid the groundwork for the delay at a Group of Seven summit, insisting fellow leaders shared a “strong sense of crisis” about the global economy. Other G7 leaders seemed to differ with Abe on this assessment, fueling commentary Abe was using the G7 summit to justify the delay.

Given that history, about half the economists - even those who predicted the hike will proceed - said there is a possibility Abe may decide postpone it again. Asked if it might be delayed even without an economic shock, 18 of 37 analysts said “yes,” while 19 answered “no.”

Asked if the government will need to compile an extra budget for this fiscal year started in April to shore up the economy, 22 of 38 analysts answered “no” and 16 said “yes.”

“The government has already adopted enough steps to soften pains from the tax hike, so there is no need to compile additional spending,” said Takeshi Minami, chief economist at Norinchukin Research Institute.

More than half of economists polled - 24 of 40 - said the Bank of Japan’s next step will be to start normalizing its super-loose monetary policy. But 16 economists projected the BOJ will ease further.

That compares with 29 and 10, respectively, in the March survey.

Many forecast the BOJ will likely retain its current monetary policy framework for at least the rest of the year.

“We expect the BOJ will escape the situation where it has to ease policy,” said Atsushi Takeda, chief economist at Itochu Research Institute. “But the central bank will keep its current pace of easing as there are no signs that inflation will reach the BOJ’s 2 per cent target.”

But Yoshimasa Maruyama, chief market economist at SMBC Nikko Securities, says the BOJ will be forced to ease further.

“The United States is expected to worsen from around late 2019, which will drag down the global economy.”

The economists predicted Japan’s core consumer price index, which includes oil products but not fresh foods, will rise to 0.7 per cent for fiscal 2019, which started April 1, and to 0.8 per cent the next fiscal year.

They also forecast the economy contracted at an annualised rate of 0.2 per cent last quarter amid weak foreign demand for Japanese products.

It will shrink again by an annualised rate of 2.0 per cent in the October-December quarter due to the planned sales tax hike, the poll showed. Only one economist predicted growth that quarter.

But the economy is expected to muster modest growth of 0.5 per cent this fiscal year and 0.6 per cent for the next, little changed from last month’s poll.

Meanwhile, Japan’s Nikkei share average inched up to close at a four-month high on Friday, but was little changed for the week, as many investors stayed on the sidelines ahead of the US and domestic earnings season and an upcoming 10-day holiday in Japan.

However, the broader market was not as rosy as the Nikkei might suggest, with the Topix index dropping 0.1 per cent to 1605.40.

The Nikkei/Topix (NT) ratio edged up to 13.62, its second highest level on record, after 13.71 touched in late December.

The benchmark Nikkei was buoyed by a couple of heavyweight stocks.

Fast Retailing Co Ltd soared 7.9 per cent to contribute a hefty 162 points, or 0.7 percentage point, to the Nikkei.